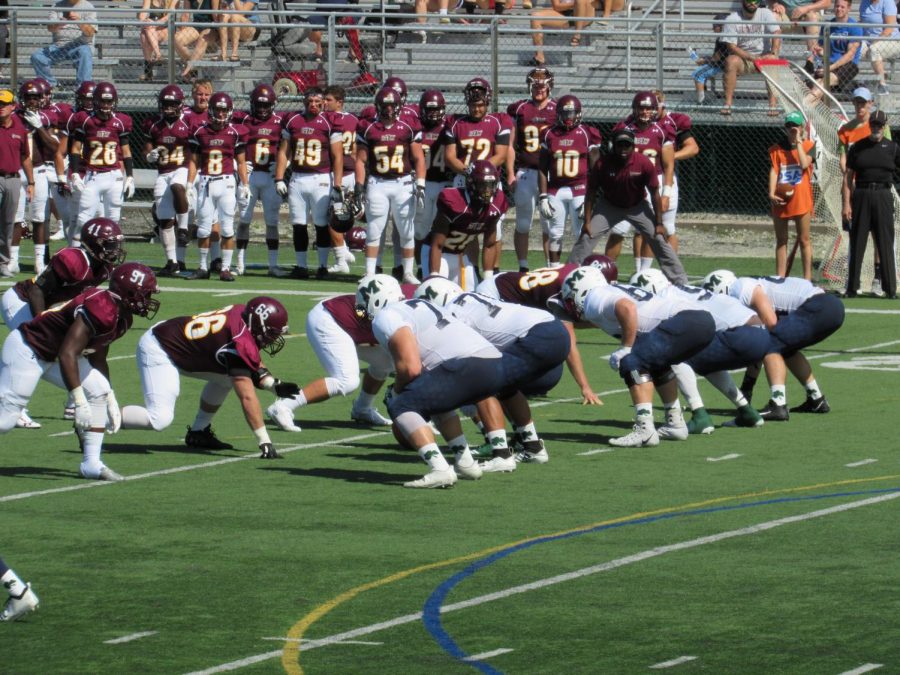 The Lakers defensive line, pictured here held off the Bloomsburg University Wolverines long enough for the offense to pull off a 14-10 win.

Mercyhurst University hosted Bloomsburg University of Pennsylvania on Sept. 15, the finale to the homecoming festivities.

Despite the Lakers going into the second quarter scoreless and then trailing for a majority of the second half of the game, a late game touchdown play resulted in their first victory of the season with a 14-10 win over the Huskies.  Bloomsburg took the lead with a field goal in the second quarter.

The Lakers answered on a 19-yard touchdown hookup from Doug Altavilla to Austin Hence. Garrett Owens set up the go-ahead touchdown with a 41-yard run.  A 36-yard touchdown gave the Huskies a 10-7 lead before half-time. From here, a 77-yard punt return by Cortez Watson was able to get the Lakers down to the Bloomsburg 3-yard line late in the fourth quarter.

It was then that Altavilla scored the go-ahead touchdown on a one-yard run with only 2:16 remaining in the game.  Altavilla’s touchdown would be the game-winning play, but there was still time on the clock at the time of the score.  The kickoff return and an ensuing penalty did put the Huskies in great field position, but they could not manage the touchdown that they needed to win.
With the Laker defense holding off the Huskies, the game ended with a 14-10 final score.

Altavilla threw for a touchdown and ran in the game-winner, completing 17 of 28 passes for 146 yards. Laker running back Owens had 15 carries for 87 yards and five receptions for 12.  The Lakers defense recorded eight tackles-for-loss against the Huskies. Dante Rodriguez, Henry Caldwell, Rocky Owens and Chris Peluso were credited with seven total tackles each.  Jacob Tarasovitch with six tackles and one sack.

“It was a battle all the way down to the last second,” said Garrett Owens. “We are satisfied with the outcome and are hoping to keep the momentum going.”  The Lakers return to action on Sept. 22 when they visit Indiana University of Pennsylvania.