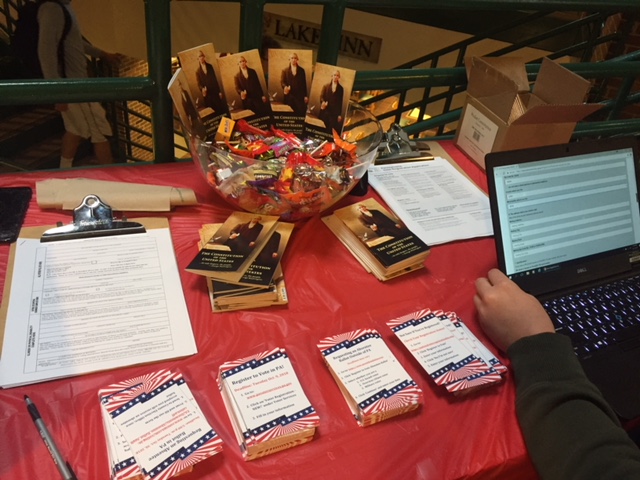 On Sept. 25, the Political Science department joined more than 10,000 volunteers across the country participating in National Voter Registration Day.

Falling on the fourth Tuesday of each September, National Voter Registration Day is a movement centered on helping Americans register to vote, acquire absentee ballots and become better educated on various voting-related topics.

Though the event has been going on for years, this is the first year the Mercyhurst Political Science department has celebrated in this way, thanks to assistant professor Victoria Rickard, J.D., Ph.D., and sophomore Jessica Witt, Communication major with a Political Science minor.

Witt knew the department would be having an event in general, prompting her to bring the idea of a voter registration drive to her adviser. Rickard helped her organize a private event, resulting in a stand set up in Trinity Green, and later moved to the Student Union, where students could register to vote or acquire an absentee ballot.

“I think it is really important for voter registration to be made so easily available on campus,” junior Political Science major Alexandra Long said. “College students are the future leaders of America. Everyone should be given the chance to be informed about our political system.”

The rain did not stop the event from being a success on campus as the team handed out candy and pocket U.S. Constitutions as well.

“The turnout was great,” Witt said. “We’ve had several news crews come, which provides positive publicity. It shows that young people are interested in voting, which may have been a gray area for people, but we’ve generated a lot of attention.”

For Mercyhurst and campuses across the country, the emphasis was on getting young people to vote, as oftentimes this has been an underrepresented group in terms of voter turnout.

“As one of the oldest districts, it’s important for young people to vote because they will be making the change,” Witt said. “With midterm elections coming up, the voting will be affecting the local government, which will have a direct influence on them.”

“It helps people define how they want our society to be. It’s our responsibility to chart what they want,” said Cieslica. “It will help the Mercyhurst campus because it expands people’s input and influence on real-world policies, which will benefit them in the end.”

No matter the effect of the weather, this passionate group of students certainly made a difference in helping their fellow students fulfill their civic responsibility.