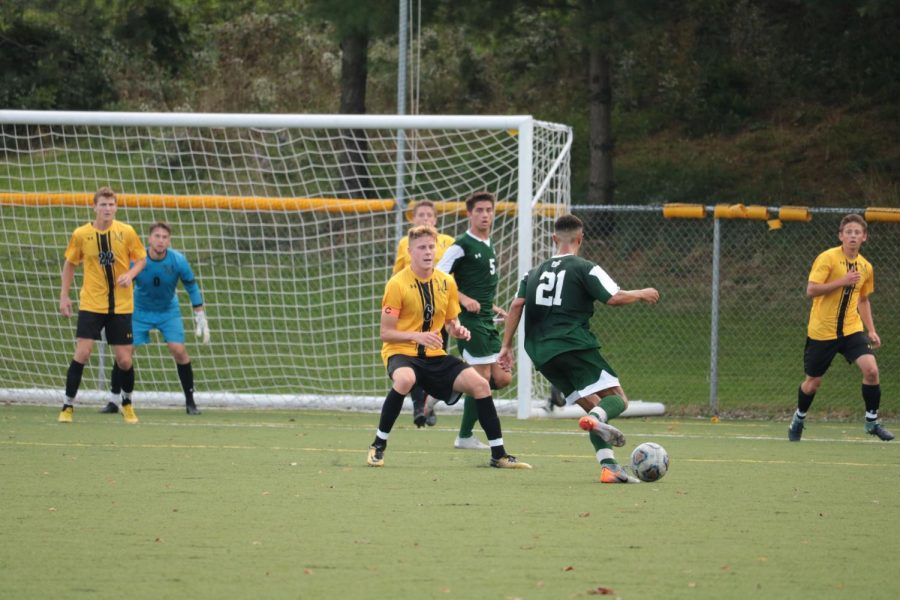 Mercyhurst men’s soccer’s No. 21 Hunter Burri looks for a shot on Millersville’s goal as No. 5 Ruben Calvo looks on.

On Oct. 6, both Mercyhurst men’s and women’s soccer teams played against the Millersville University Marauders in humid, rainy weather.

Despite a good battle by both teams, the PSAC-leading Marauders came out on top in both.  The men’s team kicked off promptly at 1:30 p.m. at the Mercyhurst Soccer Field.
The Lakers’ and the Marauders’ men’s teams seemed evenly matched right from the start.  Shot attempts from both sides started within the first seconds of the game until the first goal was scored by the Lakers’ Hady Sarr in the 20th minute with a chip over the goalie and a header to finish it off.

Before the buzzer for the end of the first half, the Marauders managed to score twice in the 10th and second minute.  In the second half, the Lakers fought but could not hold off the Marauders and were scored on twice more.  Sarr was able to score another goal for Mercyhurst with an assist from Connor Wilkinson in the 59th minute. Ten minutes later, and the Lakers had a score from Alex Garcia Piles. Goalie Martin Jarc ended the game with three saves for the Lakers.

Both teams had plenty of opportunities to score with multiple corner kicks and breakaways within the game.  At the end of the game though, the men’s team lost 4-3.

The Laker women, following a 2-0 win against California University of Pennsylvania on Oct. 3, faced an uphill battle against the Marauders on Oct. 6.  In addition to leading the PSAC, the Marauders are currently ranked as one of the Top 20 teams in the country.  The Lakers fought hard, with shot after shot fired off by players Emilie Bock (four shots), Maya Bauer (three shots), Laia Santos (two shots) and G.G. Abdalah (two shots).  Millersville’s single goal was scored in the 30-second minute by Kay Liebl.

In the second half, the Lakers’ solid gameplay was able to hold off Millersville to a 0-0 draw, leaving the final score at 1-0.  Mercyhurst’s goalie Vilde Wold ended the game with a total of six saves.
Currently, the men’s team sits at 5-4-2 and 2-2-2 in the Pennsylvania State Athletic Conference (PSAC).  The women sit at 6-5-1, with a conference record of 4-5-1.