You should reed this review 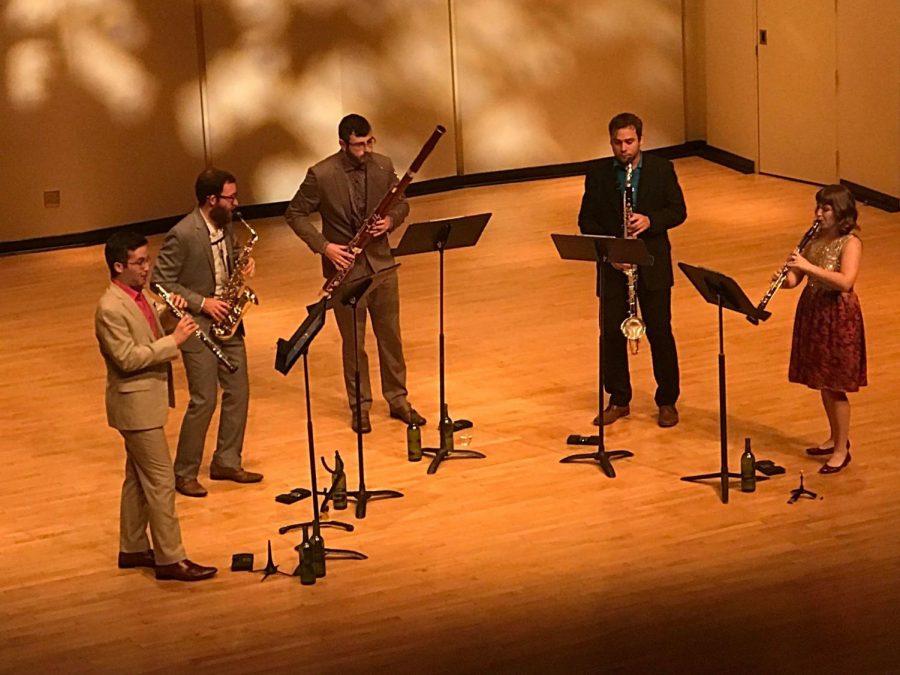 On Oct. 8, the Akropolis Reed Quintet performed in the Walker Recital Hall for the Roche Guest Artist series.
The quintet is composed of Andrew Koeppe on bass clarinet, Ryan Reynolds on bassoon, Matt Landry on saxophone, Tim Gocklin on oboe and Kari Landry on clarinet. They followed the program with a brief Q&A session.
The performance was titled “Under the Influence,” which really captured the essence of the repertoire on the program.
Overall, the recital seemed as if Bob Ross put it together.
These pieces took the audience on a musical journey through landscapes through each note as Bob Ross would with each brushstroke in his paintings.
The program began with “Splinter” by Marc Mellits. It consisted of eight movements named after different types of trees.
I really enjoyed this piece because it was very fresh and modern. It strayed away from the sound of most classical and contemporary works, which made it very refreshing.
The second movement, “Sugar Maple,” was as colorful and edgy as a maple leaf in fall.
“Linden” was very soft and mellow. The notes flowed gracefully, as if the wind were fluttering through the leaves of the tree.
“Cherry” felt as if it were a variation of the preceding movements and each of the themes were intertwined with one another.
Each movement built on the other. It was a great piece and left the audience “pine”ing for more.
The second piece, “Music of Foghorns and Seabirds,” was wonderfully eclectic and impressionistic.
It incorporated wine bottles filled with water, which were blown across to produce the sound of wind.
The piece consisted of three movements, and it really took me on a journey.
The lights were dimmed to set the mood and aura of the piece.
Landry introduced the piece and advised the audience to close their eyes to experience the piece truly.
He also noted that it was OK if the audience fell asleep during this.
I took his advice to close my eyes, and it really added to the effect of the piece.
The transition between playing the instruments and blowing into the wine bottles flowed seamlessly.
During the first movement, “Into the Distance,” it felt as if I were on a boat approaching a foggy Victorian London and about to begin an adventure.
When the startling second movement, “Murmurations,” began, it transported me to an adventure on the coast.
Finally, when they played the third movement, “Stillness,” it brought us back to the boat as if we were departing from this journey.
The piece ended with them blowing into their wine bottles together.
The recital continued with the third piece on the program, “Thaw” by 21-year-old composer Becky Turro.
This piece also consisted of three movements that describe the landscape of Acadia National Park in Maine.
This piece did the park justice by capturing its essence through the notes.
The first movement, “Hyperborea,” was very ethereal, and the notes cascaded and flowed as if outlining the very mountain the piece was inspired by.
“Echo Lake,” inspired by its namesake, began as if the notes were frozen in the water and then began to flow as the movement continued and the melody reflected on the ripples of the water.
“Kaleidoscope Cove” was a very bright and energetic movement.
It left the listener with a very youthful energy, and it felt as if we were exploring the cove with a sense of wonderment.
After a brief intermission, the quintet took the stage for the final two piece on the program.
The first of these was “Gallimaufry” by Rob Deemer.
This piece was commissioned by and written for the Akropolis Quintet.
The composer was in attendance at this performance.
The piece stays true to its name, “Gallimaufry,” as it is essentially a medley of things.
It was evident that Deemer focused on each instrument’s characteristics and the quintet as a whole as he wrote this piece.
The quintet really brought it to life.
This was evident as each instrument beautifully harmonized with the others.
From where I was sitting, I could gauge the composer’s reaction as he was listening to their performance.
As he was nodding along in approval throughout the piece, you knew that they played it perfectly.
The final piece on the program, “An American in Paris” by George Gershwin, is a classic piece that they treated well, even though it is a very complex piece.
This chamber version was arranged by Raaf Hekkema, who successfully delegated the intricate orchestrations of Gershwin’s work to the five instruments.
Akropolis executed the piece beautifully and finished the recital on a high note.
Each piece performed during the recital was an arduous piece.
However, each musician — and the quintet as a whole — showed their colors and skill as they delivered an amazing recital.
During the Q&A, the performers mentioned that they practice together for hours on end to perfect their sound as musicians and to blend their voices together as an ensemble.
This truly came through during their performance.