A tour of Wakandan fashion 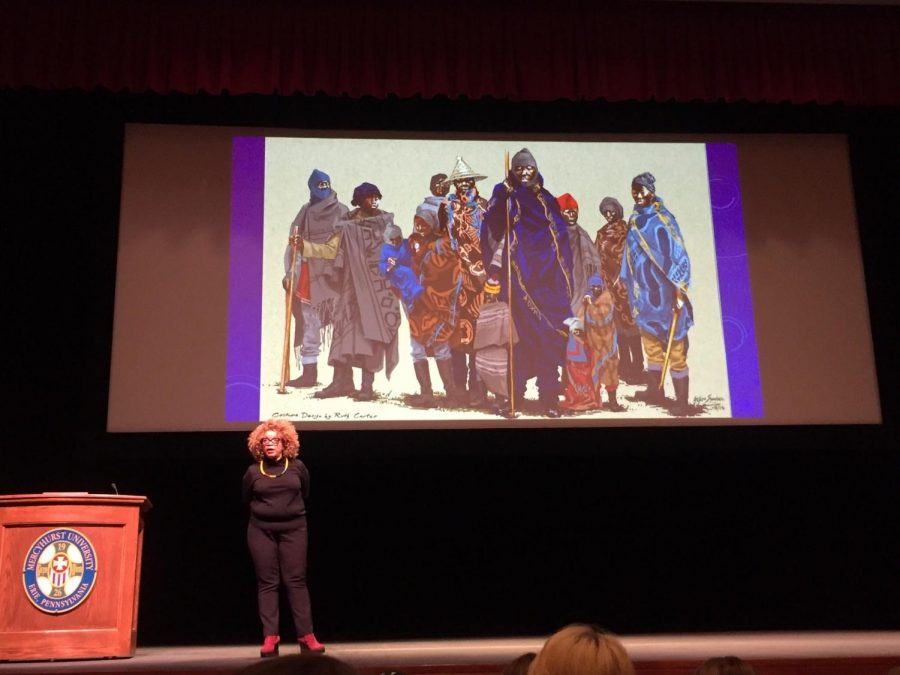 Carter has worked on many successful films such as “Marshal,” “8-Mile” and “Sparkle.” Her talk focused on her process and designs for the latest Marvel movie, “Black Panther.” The film was directed by Ryan Coogler, made record sales and gave a new meaning to how African Americans are portrayed in film.

Carter showed the accuracy and development she needed to use on the designs for “Black Panther” by using traditional African tribes for inspiration. The world of Wakanda has five distinct tribes in addition to the unique style of the royal family: the Mining Tribe, the Border Tribe, the Merchant Tribe, the River Tribe and the Jabari, each unique in style and custom.
One example of traditional garb is the himba wig, made of clay, that was used for the Mining Tribe and grass skirts for the Jabari.

Carter also showed diagrams of each character’s apparel and weapons. The biggest challenge was to design the armor and clothing in a way and style that reflected Wakanda’s greatest asset — Vibranium, the strongest metal on the earth.

The first design she worked on was the suit of Black Panther himself, King T’Challa, played by Chadwick Boseman. An early design of the suit was given to her to modify and recreate. The early suit was used in the previous Marvel film, “Captain America Civil War.” Technology has advanced so much with CGI, certain effects like Black Panther’s energy absorption were done in post-production.

She stated that Boseman had a tough time with the helmet portion because it would always crush his nose and parts of his head. When she redesigned the helmet she gave it a more comfortable feel while also making it look proportionate for the costume.

The costume style of Erik Killmonger, played by Michael B. Jordan, was a fun job for Carter because she added “super muscles” to the costume as well as making his Golden Panther suit unique and distinct from T’Challa’s.

Queen Ramonda (Angela Bassett) was designed to be regal and elegant with influences of the South African Zulu tribe. Her headpiece was traditionally for Zulu married women and had to be specially 3D printed in Belgium.

The design for princess Shuri (Leitia Wright), the technological genius of Wakanda, was to have more overlays and white colors instead of giving her a lab coat to wear.

The Border Tribe was made unique by protective blankets used for clothing and fighting. W’kabi’s (Daniel Kaluuya) blanket was the hardest design she had to do within budget because Marvel thought the blankets did not move well on the actors on camera. Carter literally shaved weight off of them until they had the effect that worked best for both combat and style.

Overall, Carter gave new life to African traditions by infusing them with modern style and technology in her costume choices.