Learn about Islamic culture and calendar 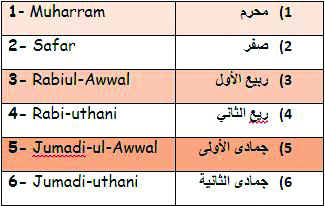 According to the Islamic Calendar, today is the 15th of Safar 1440. This is the second month of the year. The Islamic calendar — also known as Hijri Calendar — is based on a lunar cycle rather than a solar cycle, as is the case for the Gregorian calendar.

Most of the months are named according to weather conditions of the time. The current month, Safar, means “whistling of the wind.” Other examples include 1st Spring and 2nd Spring, the Dry Month and month of Intense Heat.

Months begin when the new crescent of a new moon is sighted. Strangely enough, the actual day according to this calendar starts from sunset to sunset of the following day. Since the exact number of days of each month is not known beforehand, the beginning of each month must be observed and announced by official authorities.

That said, it follows that days of each months are not fixed as in the Gregorian calendar but rather move throughout the year. This results in the Islamic calendar being 11 -12 days shorter than the solar calendar.

Therefore, the seasons do not necessarily correspond to the name of the month, nor do they match a specific month in the Gregorian calendar every year.

To make matters even more confusing, even a lot of Muslims misconceive that the Islamic calendar is called the Hijri Calendar after the historic event of the prophet Mohamed’s migration (hijra) from Mecca to Medina. The migration actually took place on the 12 of Rabi Al Awwal 622 AD. However, the Islamic calendar did not start being used until the time of the second Caliph Omar Ibn Alkhattab, that is to say, 17 years after Hijra.

His companions have suggested many other dates when remarkable events have occurred in Islamic history to start the Hijri year. These could be the prophet’s birth date or his death date, but he has likely chosen the migration as the starting year because he believed it was the most remarkable.