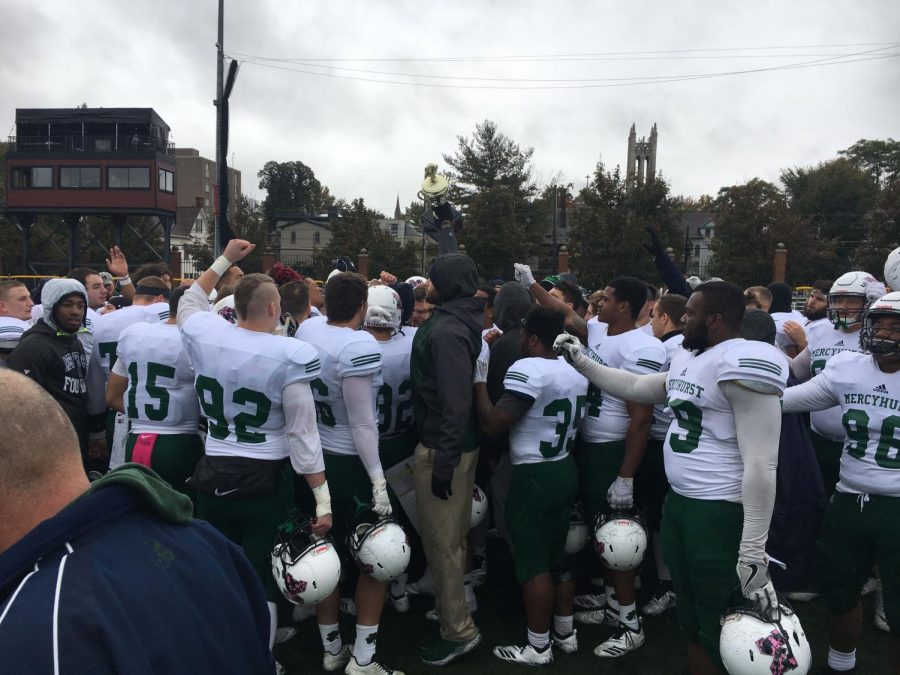 The Lakers hoist the Niagara cup victoriously after their 38-21 victory over the Gannon University on Oct. 27. The victory marks the third year in a row that the Lakers football squad has beaten Erie rival Gannon.

In a game that saw little break from a constant light rain, the Mercyhurst football squad broke a first-half scoring deadlock to pull away and top Erie rival Gannon University 38-21.  The Oct. 27 game saw Lakers running back Garrett Owens make a statement with three touchdowns and 268 rushing yards on the Golden Knights’ home turf for the annual Niagara cup.

Owens, who broke a school record for all-purpose yards (419 for the game) would go on to be the Pennsylvania State Athletic Conference player of the week for his performance.

“It always feels great to beat your rival, especially being so close in proximity to them,” said Laker quarterback Doug Altavilla.  “Winning that game meant ‘conquering Erie’ due to the fact that we beat both them and Edinboro.  It was a great team win, and hopefully it’ll allow us to finish these remaining two weeks of the season strong.”

However, it was ultimately defense that played a key role in shutting down the Golden Knights’ star running back, Marcus Jones.  Jones was held to a net of 152 yards and a touchdown.

The first quarter saw both teams trade touchdowns.  The Golden Knights got up initially with a touchdown but was soon followed on the next drive with Owens and the Lakers for his first score of the game.  The Lakers took the lead initially after the next drive with a Bryce Mostoller via Altavilla touchdown, but they continued to trade scores with the Golden Knights until the end of the second quarter.  At the very end of the quarter, the Lakers converted their final drive of the half with a Mark Shafer field goal to put them up 24-21.

The Golden Knights would not touch the scoreboard from this point on.  Owens and Mercyhurst running back Frederick Green added two touchdowns to the Lakers’ tally in the third and fourth quarter, respectively, for the 38-21 final.  “As a team we did best just coming together as a team and playing hard and having fun,” said Garrett Owens.  “We all were super positive and brought great energy to the game which resulted in a great win.”

The Lakers’ (3-6) next opponent is the Clarion University Golden Eagles, who come to Erie for a Nov. 3 game.  The Golden Eagles are 4-5 for the year, and were beaten by the Lakers last year in a close 21-18 victory at Clarion.  The season will end Nov. 10 with the veterans game against Millersville University.