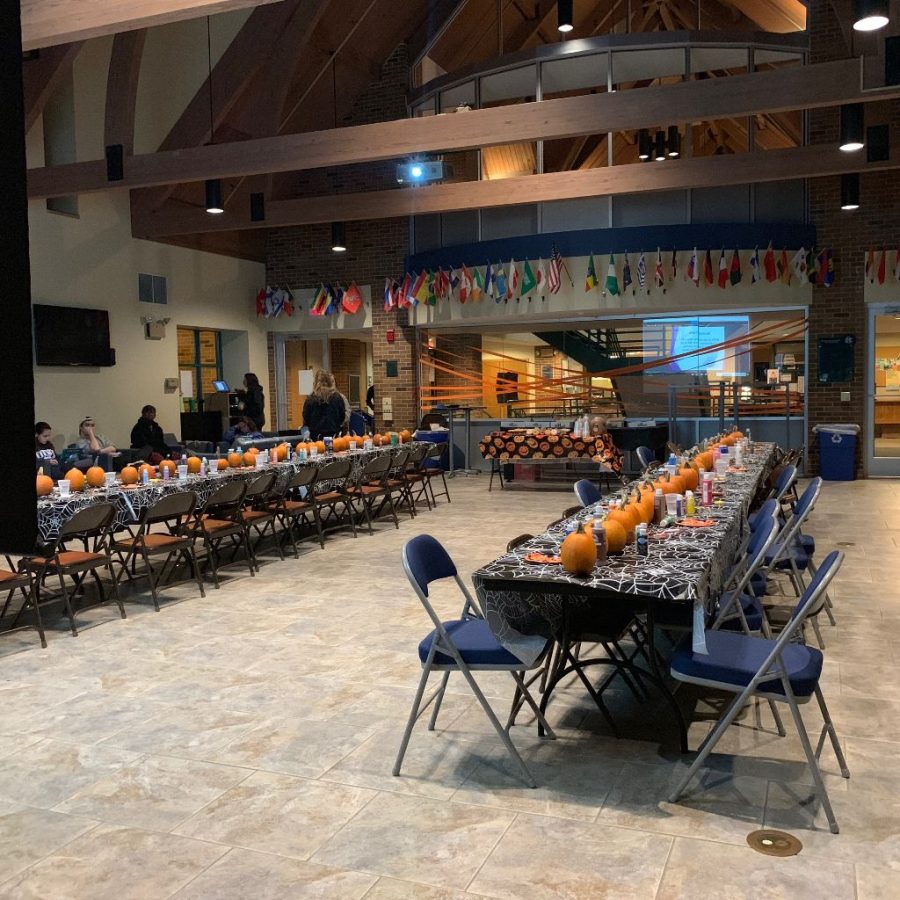 Ghosts, ghouls and haunts — oh my!

Halloween is in full swing on campus with the Mercyhurst Student Government hosting a number of events sure to entertain students.

This spooky season began with an interactive mystery theater on Oct. 19, where students were asked to “Attend the Masquerade Ball and solve the crime before the masked menace gets away!”
Unfortunately, the following night’s event, Eerie Erie Ghost Tours with paranormal author Stephanie Wincik, was canceled due to weather. Luckily, students were still able to participate in a Halloween movie night and look forward to another weekend of Halloween fun.

Don’t Be a Drunken Pumpkin kicked off Halloweekend, where students participated in classic Halloween games impaired by drunk goggles, while enjoying cider and donuts.

While the information shared about alcohol awareness may be concerning, the real frights came Saturday night at Haunted Hurst.

“I am excited to be a big part in the planning of this event this year because last year I enjoyed it as a freshman, and I really wanted to play a bigger role in Haunted Hurst this year,” Fragnoli said.
“My favorite part has been collaborating with the other programmers to make it as fun and creepy as possible.”

While part of the event’s fun is found in the continuance of the Mercyhurst tradition, this year’s programmers were sure to add their own spin on the event.

“There will be a few new decorations and of course with different people taking part in giving tours and ‘scaring’ there is always a fresh interpretation of the event,” Klein said.

Taken from last year’s event, a creepy carnival was featured, in addition to two new floors: an apocalypse on the first floor and “A Quiet Place” on the fourth floor of Egan Hall.

Guests were led through Old Main, Egan Hall and the Grotto by Ambassadors, where they would experience scares by this year’s Ambassador pledge class.

Sophomore Ambassador Jessica Skinker described her experience as the leader of the fourth floor.

“Pledges shushed the groups as they came around the bend to find a small room with chains hanging from the pipes,” Skinker said. “I sat in the corner and pointed them to the bathroom, where one of the pledges was sitting in a bathtub with a mask on and a broken babydoll in her arms. She would press on its stomach to make it talk, signaling another masked pledge to jump out and scare them. We got a lot of screams.”

“It was a really cool experience,” Carroll said. “I’m normally not a huge fan of Halloween or haunted houses, but being on the flip side and getting to scare people rather than being the one scared was really fun.”

In all, the event was extremely successful with fun had by all who participated.

The haunts certainly do not end there, however, nor are they all superficial. Different areas on campus have been rumored to be haunted by former students, staff members and sisters, specifically the Queen’s Chapel, Old Main, Egan Hall and the Grotto.

Perhaps the most infamous of these ghost stories is that of the ring on the Infant of Prague statue located in the Queen’s Chapel of Old Main.

As legend has it, during World War II, a young Mercyhurst student was engaged to a man called to active duty, intending to be married upon his return. She later received news that he was killed. In the grief of knowing she would never love again, she devoted herself to the church, becoming a Sister of Mercy.

Years later she received a letter from her former lover, explaining that he had not in fact been killed, but was taken prisoner. This news drove her mad. Knowing she could be never be with him, she killed herself, and the ring remains on the Infant of Prague statue.

It is rumored that students in more recent years have tested the ring’s power, taking it for themselves, but later returned it in anguish after lovers of their own unexpectedly passed.
This, however, is still not the most haunted place on campus. Just across the Mary Garden lies the site of the most paranormal experiences: Egan Hall.

At last year’s Haunted Hurst, two students had their own unexplainable experiences, including Fragnoli.

As an Ambassador pledge last year, Fragnoli used some of her downtime in the event to explore some of the darker places that are not normally included on tours.

“One of these places was a small room in the fourth floor of Egan where people swear that there’s a door covered in handprints that gets painted over every year,” Fragnoli said. “Despite this, the handprints always come back and I got to see the door which did, in fact, have hand prints.”

Fellow ambassador Joanne Pringle also had an eerie experience on the fourth floor last year with her friend Addison Vickers when they were working as “scarers.”

During tours, Vickers would hide in a tiny closet and then when guests walked by she would push open the door yelling “Help me!” During one of the tours, however, things didn’t go quite as planned and when she pushed the door it wouldn’t budge, leaving her trapped in the dark.

“If I remember correctly, there’s no doorknob on that door. So from the outside I was grasping at nothing to get her out,” said Pringle. “Other pledges started coming upstairs to help pull the door open. We were all really scared.”

Luckily, she was eventually able to help her friend out of the closet, however when sharing their experience months later with President Victor they learned some potentially justifying information.

“A few months after this happened, without knowing our experience, President Victor told Addison that specific room is incredibly haunted and it’s rumored that if you go into the room and sit in the chair she sat in you will die.”

With these true stories in mind, students can keep the spooky Halloween spirits with them all year. Happy Halloween, Lakers!