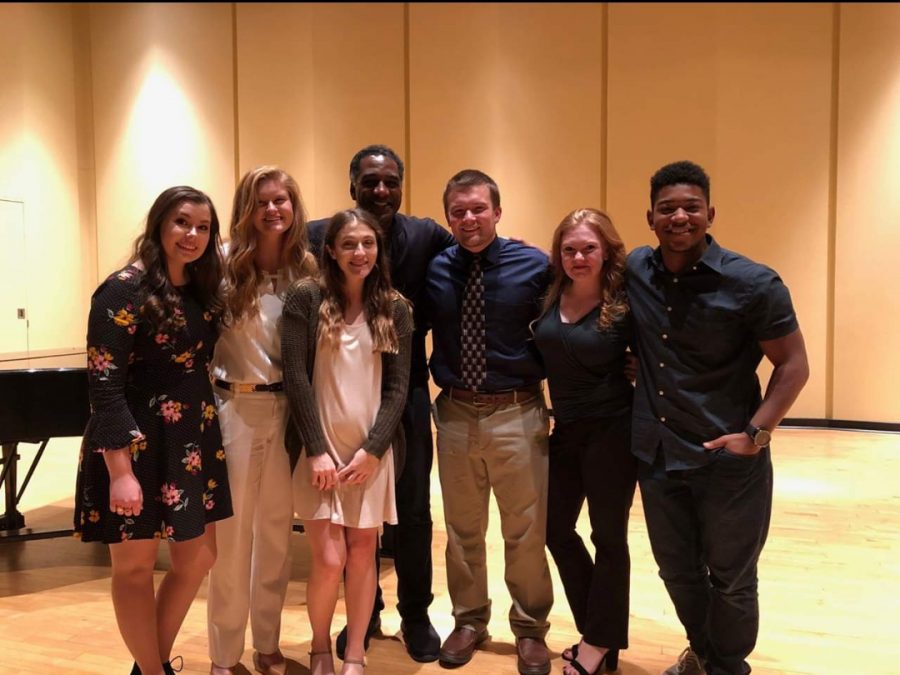 Broadway superstar Norm Lewis entertained a packed house with a moving concert on Nov. 2 in the Walker Recital Hall.
This intimate concert showcased both Lewis’ amazing vocal ability and his down-to-earth nature.
On Nov. 1, Lewis gave a master class for Mercyhurst students as well.
It featured Erin Fink (senior, Biochemistry), Jillian Johannes (2nd year graduate student, Intelligence Studies), Alexis Webb (senior, Music), Jacob Tretinik (junior, Biology), Abby Larimore (senior, English and Theatre contract major) and Aaron Holman (freshman, Music Performance).
Each of these students had the opportunity to sing for Lewis and gain constructive feedback.
Lewis was warm and down to earth as he met with the students and both taught and learned from them.
During the concert he gave the following evening, he recognized and interacted with some of those students in the audience.
The audience was incredibly responsive and excited for Lewis throughout the entire concert on Friday.
When he first walked onto the stage he was met with thunderous applause, to which he responded with surprise and appreciation for the lively crowd.
He was accompanied by his “friend and brother,” Joseph Joubert, on piano.
The two had great chemistry as they joked around and created a comfortable mood for the night.
Throughout the evening, Lewis showed off his experimental side by singing his own renditions of songs that were made popular by roles he never performed.
Lewis recounted being in “My Fair Lady” as a member of the quartet during the song “Oh Wouldn’t it be Loverly,” which is traditionally sung by the female lead, Eliza Doolittle.
He said that he had always wanted to sing that song, so he was excited that was able to finally put his own spin on it in concerts like this.
Lewis showed his more playful side with his rendition of “Before the Parade Passes By” from “Hello Dolly!”
This song was important to him because it landed him a role in a show.
However, he noted that it was a risky choice to perform it in an audition while he was still a novice on the Broadway scene.
Lewis was recently in a revival of George Gershwin’s “Porgy and Bess” with Audra McDonald.
He recalled that during this process some people, including composer Stephen Sondheim, did not like the way the revival made the classic songs more modern and experimental.
Lewis expertly combined both operatic and belting styles as he sang one of the show’s most popular songs, “I Got Plenty O’ Nuttin,” alternating between the two vocal styles for the verses.
Lewis is most well known for his powerful roles as Javert in “Les Misérables” and the Phantom in “The Phantom of the Opera.”
Both were dream roles for him and he showed sincere gratitude for having performed both during his career.
Lewis showed Javert’s resolve and passion as he sang “Stars,” and gave his own rendition of Jean ValJean’s moving song, “Bring Him Home,” both of which are from the musical “Les Misérables.”
He ended the concert with “Music of the Night” from “The Phantom of the Opera” to a long standing ovation that led into two encores by Lewis.
These songs were the most powerful and beautiful of the night and ended in a standing ovation from the crowd.
His first encore, “No One is Alone,” was dedicated to friend of his who loved “Into the Woods.”
Lewis showed himself to be a down-to-earth person in addition to being a wonderful performer.
He met and took pictures with several excited students after the concert and easily charmed the audience with his humility and humor.