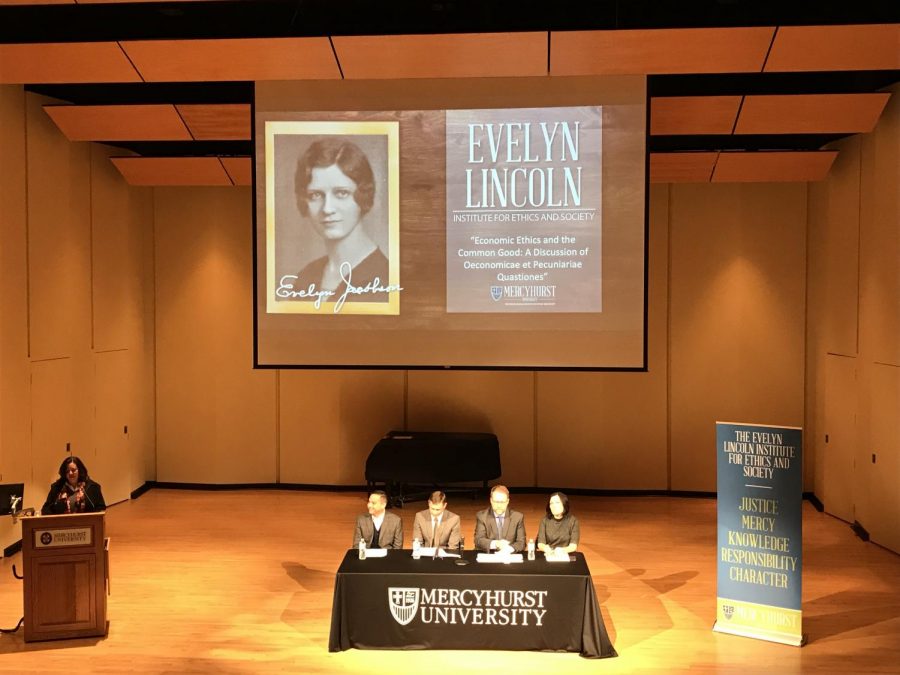 The Evelyn Lincoln Institute for Ethics and Society at Mercyhurst University hosted a panel presentation called “Economic Ethics and the Common Good” in Walker Recital Hall on Nov. 7.

The discussion focused on the document “Oeconomicae et Pecuniariae Quaestiones: Considerations for an Ethical Discernment Regarding Some Aspects of the Present Economic-Financial System,” which was released by the Vatican on May 17.

“Oeconomicae et Pecuniariae Quaestiones” addresses the economic and financial matters based in the teachings of the Catholic Church. It explains the need for ethics in economic sectors as economics involves human action.

The document discusses how it is necessary to have cooperation between economics and human interaction. It also recognizes the need to teach about the combination of ethics and economics now so that future generations understand its importance.

The panel discussion was broken into a background of economics, the Church’s involvement, admitting a problem and its implications in the world. It concluded with some general questions asked by the moderator, Verna Ehret, Ph.D., and the audience members.

Argaez started the panel off by discussing the economic side. He explained that while there has been economic growth in the past 40 years, there has also been an income inequality increase with half of the national income going to the top, richest 20 percent.

Argaez said that inequality would not be as much of an issue if people had the opportunity to rise. He stated that there currently is a “70 percent chance if you are in the bottom 20 percent that you would not make it to middle class.”
In his “From economic theories to policies” section, Argaez said, “economics cannot tell what is good or bad. … It just says what it is.”

Baker went through the history of why inequalities were a response to urbanization in which the poor became more anonymous. Integral human development was touched upon by Baker and he explained it as always being relational and communal. This describes the need for people-centered ethics and a strong moral framework.

He expressed the need for the “common good (of people) at community level, not just individual” and that “money must serve the needs of people, not rule them.”

Baker also touched upon the section of “Oeconomicae et Pecuniariae Quaestiones” that expressed the need for teaching ethics to people. His advice was to reach out to and teach new business leaders so that ethics can take root now.

McCarty started his explanation by illustrating that economics benefits some and sacrifices some. In his remarks, he explained the importance of using an ethical analysis, not just financial reports. He painted a grim picture that he recognized himself. He announced that there needs to be radical charity that sacrifices the self and reimagines institutions as well as the “redistribution of wealth of everyone.”

McCarty said the Church gives a lot, but the hole of need is only filled by greater sacrifices. He gave the advice “to look to women religious orders who live in community.”
In addition, his solution was to start local with practical solutions to overcome this economic injustice.

Surzhko-Harned discussed how international implications affect the economy. She expressed that it is not practical to “cookie-cut democracy and capitalism everywhere.”

With further explanation, she alluded to the serious implications, both ethical and political, of these investments. In addition to the charity touched upon by McCarty, Surzhko-Harned also mentioned that charity is not always going to work the best.

“It is hard to criticize what comes out of people’s best intentions,” Surzhko-Harned said.

As there are generations to come, she asserted that participation needs to include both economic development and human dignity.

Even with the different backgrounds in the subject, the panelists explained their thoughts on the document and possible future plans well enough for the audience to understand.

After their personal explanations, the question-and-answer period began with the question “Have economists tried to address the dignity of people?” Argaez answered with the thought that it is “not (part of) mainstream economic theory.”

Surzhko-Harned jumped in, saying that “economics informs us, but it is up to policy makers to think about the ethical implications.”

The second question asked if the Vatican has been an influential presence in reshaping international policy. Baker answered by saying that it is “hard to answer from an American lens,” but could suspect the world leaders that the document was trying to address.

There were common thoughts between Baker and McCarty stating that they were not sure how many people and world leaders take the Vatican seriously as a leader for economics.

Surzhko-Harned looked at “Oeconomicae et Pecuniariae Quaestiones” a little differently by stating it is more of a message for the underprivileged to say the Vatican recognizes their struggles.

When the subject of charity arose again, the panelists explained further what they mentioned in their original discussions.

McCarty discussed that charity is “not just giving what (others) need.” His advice was to start local and work with local bodies in the community.

Surzhko-Harned said that despite the heart being the right place, the “execution is not always great.”

Baker shared like sentiments by saying that “responding to immediate needs is not enough.”

Argaez concluded with a confirmation that “charity helps at local levels.”

The final question created a discussion on what an economic development with a focus on human rights would look like.

The common answer from the panel was a revolution. In doing so, people would finally realize and value the common good for everyone.