Pilgrimage to Panama in the Capital 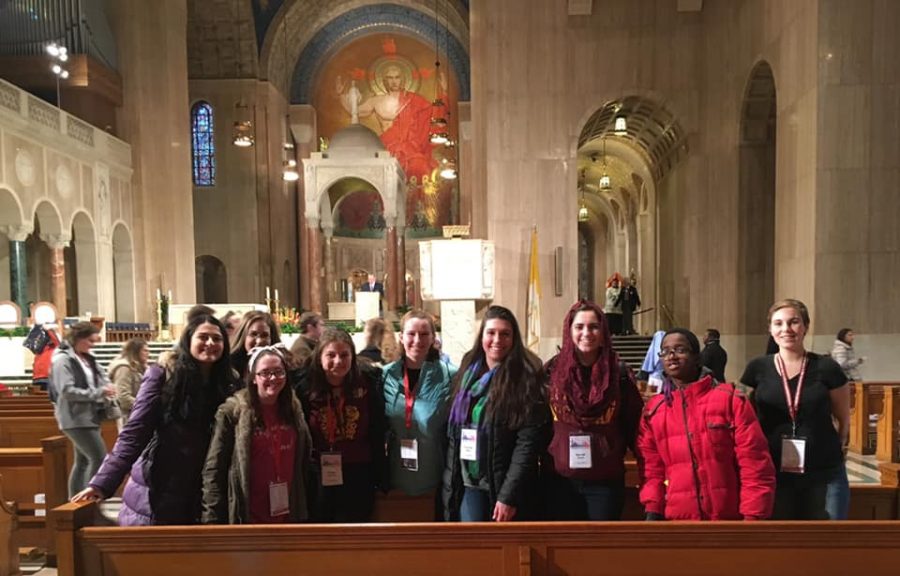 Every two to three years, thousands of young Catholics gather to share in their faith with one another and with the pope in celebration of World Youth Day. World Youth Day 2019 occurred in Panama City, Panama, as a weeklong event Jan. 22-27. For those who could not make the pilgrimage to South America, Catholic University of America hosted a stateside festival called Panama in the Capital or World Youth Day D.C.

Panama in the Capital was a one-day event Jan. 26 in Washington D.C. This event was created with the intention of showing young Catholics that they are not alone, that the Church needs them and the world need them.

The theme for this year was the Virgin Mary’s “Yes” when God asked her to bear the son of God, Jesus. The specific verse comes from Luke 1:38, “I am the servant of the Lord. May it be done to me according to your word.” This theme is meant to center those attending World Youth Day in finding their own mission that God has called them to in their own lives.

The places in D.C. helping to host the festivities included Catholic University of America, Saint John Paul II National Shrine and the Basilica of the National Shrine of the Immaculate Conception.
Allie Schweiger, a sophomore English major, showed her appreciation for the stateside opportunity.

“I really liked the sense of community at the event,” Schweiger said. “It was also nice to be surrounded by other Catholics my age. It gives me hope for the future of the church.”

It was a day filled with musicians and speakers, where the youth of the Catholic Church shared in celebration.

The breakout speaker sessions included topics including “How to Take Your Prayer Life to the Next Level,” “How Ordinary People Do Extraordinary Things” and “Is Religion Opposed to Science?” in the first time block. Topics on “Holiness & Hollywood,” “How to Listen to the Voice of God in Daily Life,” “Finding Healing and Wholeness as a Catholic” and “Is Lifelong Love Possible?” were examined during the second session.

In addition to the speaker sessions and musical performances, a Vigil Mass was held in the Basilica of the National Shrine with Archbishop Christopher Pierre, Apostolic nuncio to the United States, celebrating. There was also time for candlelight Stations of the Cross, confession and Adoration and a vocations coffeehouse where priests, religious and seminarians gathered to speak with those who may be discerning their vocation.

Music performances by Christian artists Marie Miller, the Restless, Los Capuchinos, Hillbilly Thomists and Jorge Zurita could be attended throughout the day.

Collin Davis, a sophomore Hospitality Management major, voiced his opinion on the music.

“My favorite part of WYD was listening to different songs from the Restless,” Davis said. He also valued the emphasis on a commitment to “setting 15 minutes out of your day to pray,” which was based on one of the speaker presentations.

To close out the festivities, those attending the event were invited to watch a live dance performance by Grufolpawa Panamanian Dancers and finally, enjoy live music by the Hunts.

Each World Youth Day is at a different location around the globe, with other years being hosted in places such as Krakow, Poland (2016), Paris (1997), Rio de Janeiro (2013) and Toronto (2002) since it was initiated by Saint John Paul II in 1986. The pilgrimage is intended for ages 15 through 35, though everyone is welcome to attend.

As for the next World Youth Day, those interested in attending should book their plane tickets now to Portugal for the 2022 celebration.