Students get involved for Spring 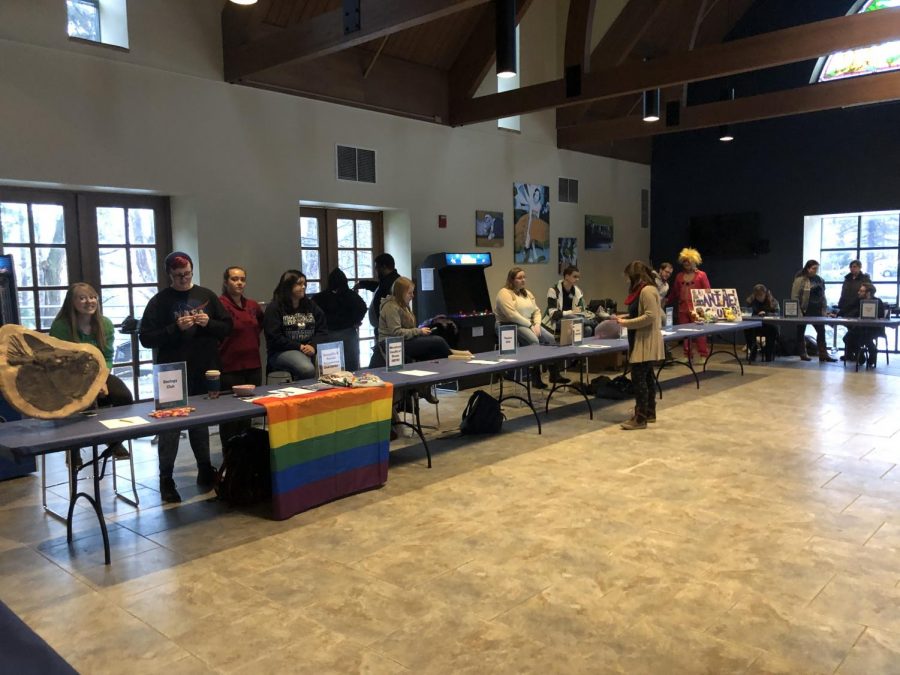 The Spring Involvement Fair was held in the Student Union Great Room on Jan. 23 and featured more than 50 Recognized Student Clubs and Organizations (RSCOs) that are available to all students.

The strong turnout resulted in the expansion of the fair to the top floor of the Student Union this year, with much involvement despite the freezing weather. Even Luke the Laker managed to come by to make an appearance.

The Figure Skating Club was represented by sophomore Sports Medicine major Autumn Martin. Martin said she has a passion for figure skating that started when she was just six years old.
“When I came to college, I knew I wanted to continue to skate, and I hope that’s the case for others, too,” Martin said. When asked why she was at the fair, she said, “we are recruiting today because one of our co-presidents is leaving and we need more board members.”

The MYRACLE group was represented by sophomore Psychology major Emma Farrell, a newly inducted leader. This club holds retreats in and around the Erie area.
“The retreats are for high school students and current members. I recently went on a retreat and it was a lot of fun. It made me want to become a leader and get involved,” Farrell said.

The Fashion Council was represented by freshman Shannon Gotham, a member of the Executive Council. Gotham is a Fashion Merchandising and Political Science double major.
“Fashion Council is fun and brings people together. I want to give people the same opportunity that the club has given me,” Gotham said.

Colleges Against Cancer was represented by senior History major Paul Cohen. Cohen is the current president and revived the club in August of 2018.

When asked why he was recruiting, Cohen said, “I care very passionately about this club and I’m looking for someone to maintain the club after I graduate.”

In the Great Room, clubs like Cultured Coffee Club, the Martial Arts, Strength, Conditioning and Fitness Club, and Fencing Club were represented.

Cultured Coffee Club is brand new and was represented by president Joel Basenback. Basenback is a sophomore Biology major with a passion for coffee.
“I started this club for the purpose of educating people on different types of coffees throughout the world and what they taste like,” Basenback said.

When asked why she originally joined the club, she said, “I came in my sophomore year of college as a black belt and wanted to help expand the membership of the club. I want to teach people how to defend themselves.”

Vonk describes the Martial Arts, Strength, Conditioning and Fitness Club as a “melting pot of different art forms” because not all members come from the same background or any background of martial arts.
Lastly, senior Intelligence Studies major Peter Ruhling, vice president of the Fencing Club, encourages people to join his club.

“You don’t need to have any experience. Our board members teach the basics, and our goal is to pass on our knowledge. We like to emphasize that fencing is an art form and that it teaches respect,” Ruhling said.

Fencing Club meets once a week on different days, so that students with night classes still get the opportunity to learn how to fence.

The Spring Involvement Fair was successful and very busy. Many students came and signed up to try new things. For many students, being a Laker and trying new things is what Mercyhurst is all about.