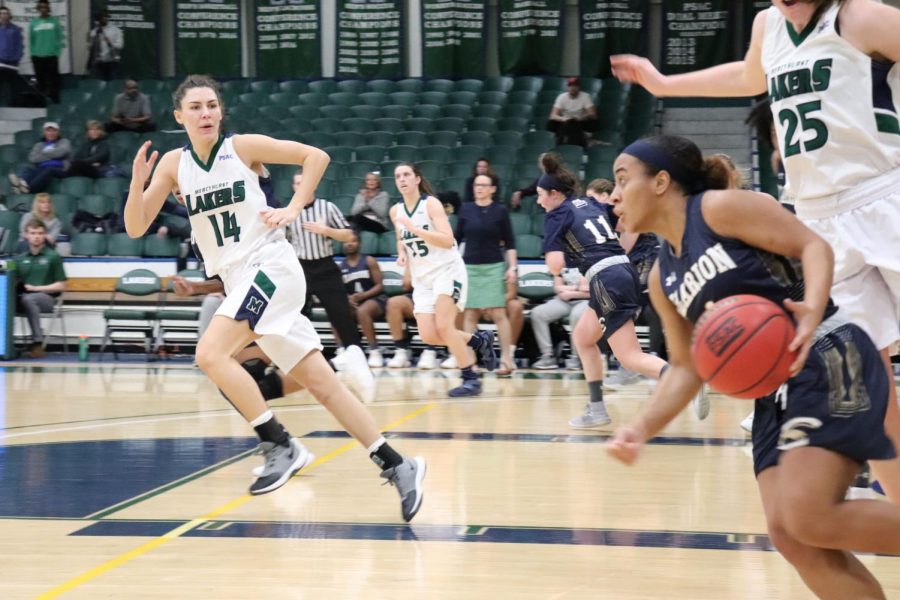 The Lakers’ No. 14 Lauren Lapertosa races from the paint as a Clarion Golden Eagles player gets ready to dribble down court.

A game that by any stretch of the imagination could have been necessary for Mercyhurst women’s basketball head coach Deanna Richard’s players fell out of their hands before it was too late to make a run.

The Clarion University Golden Eagles led the Lakers by as much as 22 on Wednesday, holding that margin with three minutes left in the third and staving off a furious Laker comeback for a 73-65 win.

“We struggled,” Amber Renz, junior said. “We didn’t play our game, we played right into theirs, which caused us to lose.”

The Golden Eagles led the entire way, usurping Laker attempts to cut the deficit. The Lakers’ Emily Shopene opened the scoring off a steal from Kadijah Dickson, then fell into a four-point deficit at 3:50 of the first when Eliza Oswalt found Renz down low to open the Lakers’ largest lead of the evening. Dickson responded 20 seconds later with a jumper of her own, then Shopene saw a free throw sandwiched in between consecutive rainbows from Bekelja, where she would add a third one with 1:35 for a 7-0 run to close the quarter for the visitors.

The Lakers would close to within four at 2:40 of the second on three straight points from Meghan Komendarek, but the Golden Eagles’ Yndiah Bobo and the Lakers’ Kori Sidwell would share steals off the defensive rebound. A foul and missed layup from Komendarek later allowed Imani Dockery to convert twice from the line, part of a 7-8 first half from the line and 28 points overall in the paint.

Then it was the Golden Eagles’ Dickson’s turn again, grabbing a defensive rebound off a miss from Jenna Kunst and converting the jumper before responding to layups from the Lakers’ Oswalt and Renz. Dickson added two layups in the final minute for the Golden Eagles’ largest lead of the first half, the eighth time this season the Lakers have trailed by at least 11 at intermission.

But Sidwell opened an 18-7 run for the hosts at 1:26 of the fourth that saw three straight defensive rebounds off missed opportunities, including one that set up Kunst to cut the lead to 15. But with 3:20 to play in regulation and the Golden Eagles up 17, the Golden Eagles’ Bobo saw the ball snatched into Sidwell’s hands, allowing the Lakers’ Rachel Chessar to open a 9-1 point spurt for her team. But Bobo drew a foul from Shopene 11 seconds after Chessar’s rainbow and scored four straight visitor points with 13 seconds left in regulation, the only interruption.

The Golden Eagles’ Dickson opened the third with two quick baskets a minute in, and added another one at 2:42 after Shopene and the Golden Eagles’ Emily Hegedus traded baskets, sparking a 12-4 run over the next 4:17. She would later trade a bucket with two free throws from Renz, who was held to 12 points but was one of three Lakers in double figures.

The Lakers would get six back in the final minute on free throws from Shopene and Sidwell and a layup from Chessar, but Dickson responded to close the quarter.

The loss sees the Lakers falling two games out of the sixth and final playoff spot in the West.

All is not lost for the Lakers, however, with a trip to Slippery Rock University upcoming Feb. 13 in a division that has seen only No. 4 ranked Indiana clinch a postseason berth. Slippery Rock is 9-13 and 7-9 for the PSAC.

“I am excited to play Slippery Rock,” Renz said. “It will be tough. SRU is a very aggressive team. I look forward to the challenge. In the end, win or lose, it’s always about getting better as a team and as an all-around player.”