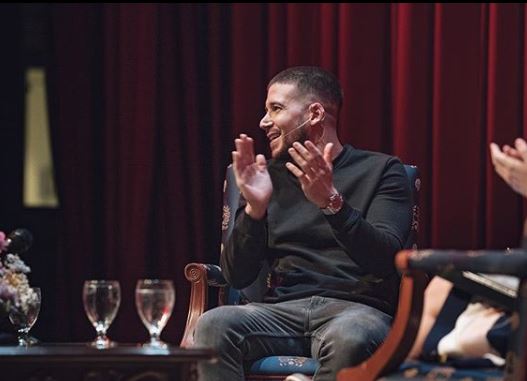 Vinny Guadagnino, star of MTV’s hit reality show, “Jersey Shore,” stopped by Mercyhurst University as part of MSG’s Distinguished Speaker Series on March 12 in the Mary D’Angelo Performing Arts Center to discuss mental health and his life in the limelight.

Guadagnino thanked the crowd for attending and praised the students for coming to listen to him speak. Guadagnino detailed his experience with anxiety and how he used his platform in the media spotlight to talk about mental health.

During the fifth season on “Jersey Shore,” he made a noticeable exit from filming, which stunned the cast and MTV viewers. His castmates supported him, but they didn’t understand the seriousness of his anxiety.

Guadagnino stated that a platform like “Jersey Shore” may not be the most conventional place for discussions about mental health, but he wants to help reach anyone he can with this message.
Guadagnino said that filming the show was like “waking up every day with a sense of dread” due to his anxiety.

He made his way home to Staten Island, where he recuperated. This time inspired his book, “Control The Crazy: My Plan To Stop Stressing, Avoid Drama, and Maintain Inner Cool.” He returned to filming for the rest of Season 5.

“Ultimately what I learned today is I try not to be perfect anymore. I tried to live my life in a perfect capacity,” Guadagnino said.

After confronting the root of his anxiety, it still took time to build up ways to maintain his mental health.

Guadagnino offered crucial advice to the crowd about handling anxiety in college. He suggested activities such as meditation, exercise and counseling.

Guadagnino urged the crowd to “check in with yourself.” As well as emphasizing to college kids the importance of sleeping, eating healthy and going to the gym.

He asserted the importance of normalizing discussions about mental health. There is a stigma around mental health that it is not as valid or talked about as physical health, but Guadagnino wants to help change that.

“Anxiety is normal. We all get stressed, we all get depressed at times,” Guadagnino said.

After discussing his life and 2012 book, the event transferred into a Q&A session.

Most of the questions and answers were tongue and cheek. Inside jokes about castmates were revealed, along with affectionate stories about Guadagnino’s mother.

The event started at 8:30 p.m. however, excited fans started camping out at the event by 5:40 p.m. A few lucky students won VIP pass tickets to sit in the balcony to watch the event.

Students were very excited about the event. Quotes from “Jersey Shore” were passed around along with current events regarding Guadagnino.

Guadagnino also gave the fans something to look forward to. He and “Jersey Shore” castmate Pauly D are getting their own show. The recently filmed “A Double Shot at Love with DJ Pauly D and Vinny” is due out later this year.