Athletes show up for charity 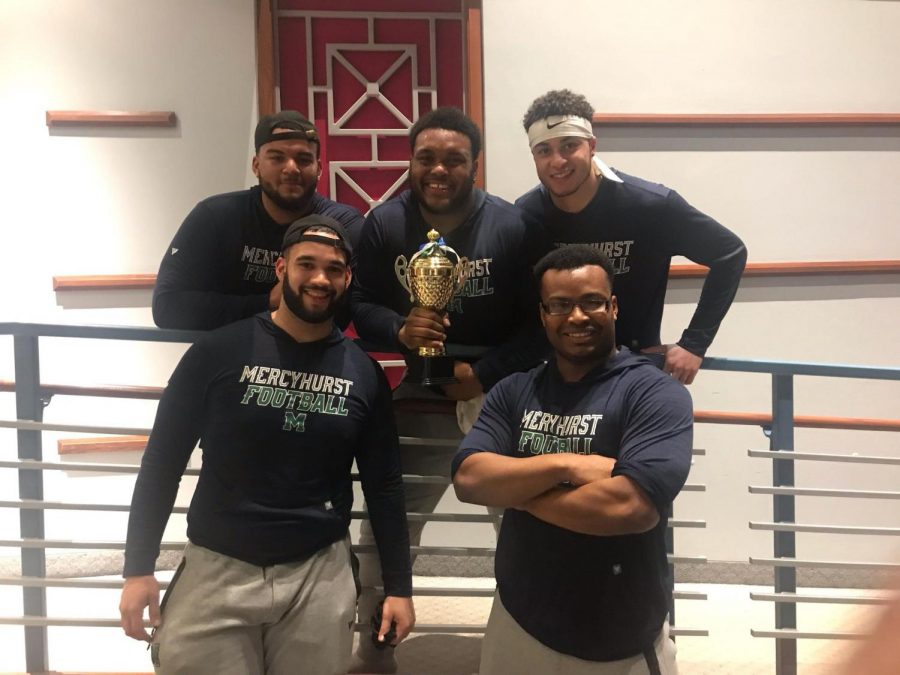 On March 18 crowds of students filled the PAC at the annual Laker Showdown, benefiting the Make-A-Wish Foundation.

This annual event, a dance off betwen the sports teams, is organized by the Student Athletic Advisory Committee (SAAC) to help the Make-A-Wish foundation raise money to grant the wishes of terminally ill children.

By the end of the night, $3,000 was raised through teams’ sign up fees, purchased student tickets, auction bids and raffle tickets. “I consider any money we raised a success because it goes to an awesome cause. I think that’s the most important part of this event,” Laker Showdown Committee Chair, Chloe Tyillian said. “The children need the money the most to make their dream trip turn into a reality.”

In recognition of the cause, the night kicked off with a few words from Make-A-Wish liaison Jan Stork. Stork informed students that in Pennsylvania alone 500 children are diagnosed with a life threatening illness, highlighting the importance of the organization’s work.  “We provide them hope at a time when all hope seems lost,” Stork said.

The rest of the evening was hosted by MC Leah Kern who introduced faculty judges from across campus, including Director of Residence Life, Megan McKenna; Colleen from the Laker, professor John Parente, D.Ed. PhD, Vice President of Student Life, Laura Zirkle, Ph.D. and Athletic Director Brad Davis. Kern was also responsible for introducing each athletic team and act.

The first to perform was the women’s water polo who, as a follow up to last year’s rendition of Pitch Perfect, danced a routine from the movie’s sequel.

In the following performance, by the wrestling team, audience members learned to “Dougie,” before watching women’s hockey take on a variety of Britney Spears hits. The men’s club hockey team was up next, decked in Hawaiian shirts and beachwear, for a mash up of Beach Boys songs and “Baby Shark.”

“With this being our team’s first time participating, we really weren’t sure what to expect,” club hockey player Nate Shemo said. “It was definitely a ton of fun for a great cause and I’m looking forward to next year.”

The first act was wrapped up by the women’s lacrosse team who threw it back to the early 2000’s with Hannah Montana’s “Hoedown Throwdown.” The entertainment did not stop during intermission, however, with the dance team taking to the stage next with their performance of “Royal Family.” “Last year I really enjoyed watching the Laker Showdown and this year performing in it with the Dance Team was even more fun,” dance team member Haley Huntley said. “Everyone did a great job and I can’t wait until next year.”

The rest of intermission was dedicated to auctioning off various PSAC signs and banners, before the second act opened up with the men’s ice hockey team.  Dressed as Victoria’s Secret Angels, the team modeled their unique looks to the Backstreet Boys’ “Larger than Life.” Exciting costumes seemed to be a theme of the night, with the women’s soccer team taking to the stage next, covered in blankets as they danced to “Katchi.”

Next to last, the cross country team performed a mashup of running related songs while holding signs that they still want Sean Kingston for Springfest. The event wrapped up with last year’s reigning champs, the football team, featuring a number of popular dances from “Soulja Boy” to “Single Ladies.”

“In my opinion I think the highlight of the night was standing with the judges while the football team was on stage dancing and seeing the crowd go absolutely insane,” Tyillian said. “I’d say my favorite act was definitely football. They worked hard to make theirs so great and it definitely showed.”

For a second year in a row, the football team took first place, with cross country coming in second, followed by women’s water polo. Moving forward, Tyillian hopes to get a sponsor for the trophy so it is even larger and more impressive. “Other than that, I think next year will be exciting to see what they implement into the performances and the event all together,” said Tyillian.

Although students have to wait another year for the next showdown, raising money for Make-A-Wish does not have to end here. SAAC will be hosting a 3-on-3 basketball game from 11 a.m. to 2 pm on March 24 as another fundraising effort. For $12, teams of 3-5 can register by emailing arenz10@mercyhurst.edu.