A ‘Big Switch’ for MU presidents 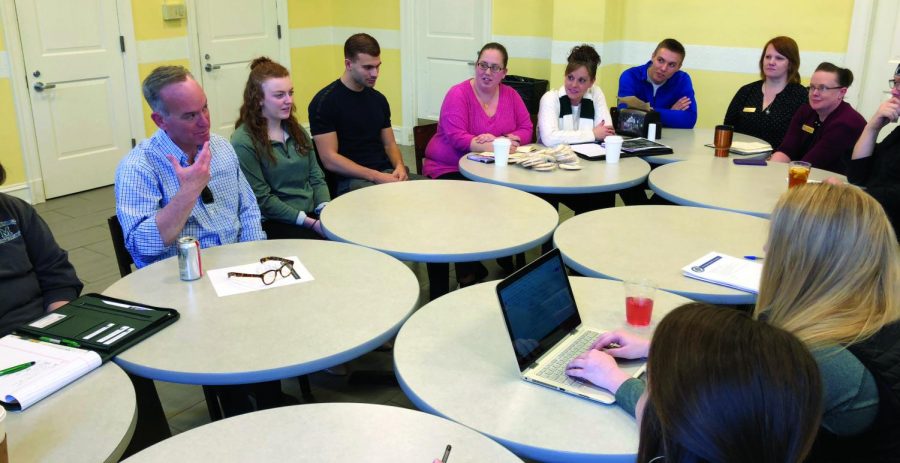 On March 20, the Mercyhurst campus experienced the first ever “Big Switch” as university President Michael T. Victor and MSG President Vincent Marrazzo swapped places and duties for the day. The purpose of this event was to allow Victor to see what it is like to be a typical student at Mercyhurst and for Marrazzo to experience the responsibilities of being president of a university.

“Some other schools around us do similar activities between their president and student body,” Marrazzo said. “I thought the opportunity to see through President Victor’s eyes for a day would help me better understand how the university works.”

The idea for the two presidents to switch places was proposed by Mercyhurst Student Government to Victor. When Marrazzo showed him the proposal, Victor thought it was a good idea and was on board. When the big day came, Victor and Marrazzo arrived at school, ready to start the day, but in opposite places.
“I didn’t have any expectations going into this because I really didn’t know what to expect,” Marrazzo said.

At the beginning of the day, Marrazzo and Victor met in the President’s Office in Old Main. As a student, senior “Mike Victor” attended a class in Bio Chem, while “President Marrazzo” took part in a weekly cabinet meeting with the role of leading the conference. Going to classes and meetings was a hands-on way for both to see the everyday realities of each other’s role.

“I run student government meetings all the time but stepping into the role of a university president felt like I was acting in position, that I had to be like President Victor,” Marrazzo said.

Walking the day in President Victor’s shoes gave Marrazzo a unique way to learn about the different perspectives of holding such a high-ranking position at Mercyhurst.

“I am understanding the position President Victor is in, now more than ever,” Marrazzo said.

Throughout the day, both student and president followed a schedule that included lunch, additional meetings and some campus tours — including with Victor as an Ambassador for students.

Marrazzo, although looking forward to experiencing the entire day through the eyes of Victor, could not wait until the end of the day to drive Victor’s Mercedes.

Students can all recognize Victor’s reserved parking space for the Mercedes outside of Preston Hall. However, for the event on Wednesday, the sign was temporarily removed for a new custom sign made specifically for “President Marrazzo.”

After the long day of switching places and a final meeting, Marrazzo was able to drive the Mercedes around the campus as student Victor walked home to his student apartment.

At the end of the day, the two Mercyhurst “presidents” switched back into their original positions on campus after a successful day of viewing the campus in a unique, new perspective. But in the end, both still want the same for the university and its students — the best of the best.