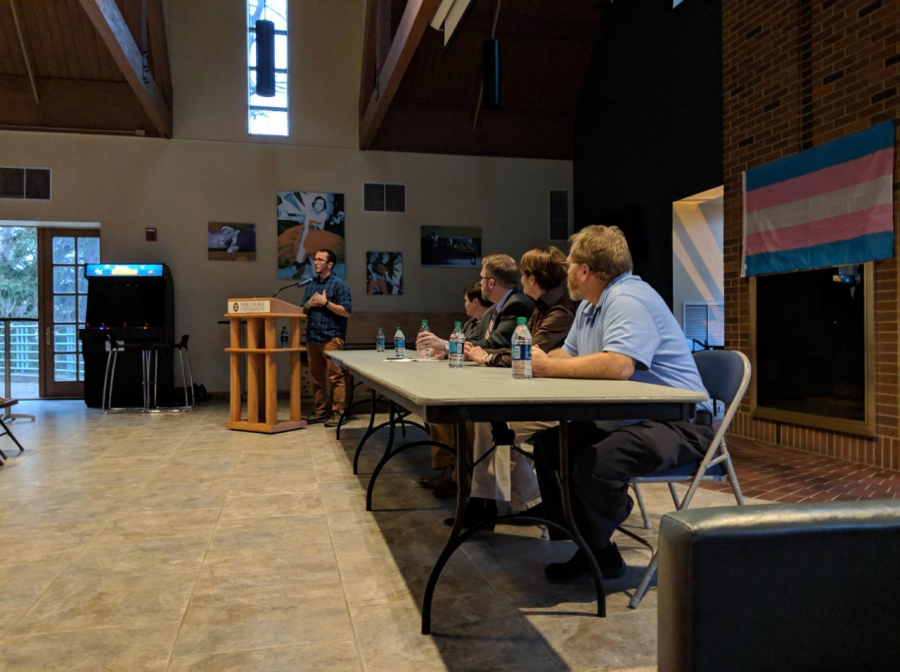 Titus is the first openly transgender elected official in Pennsylvania history. He took political office in 2017 and serves on the Erie School Board.

Titus graduated from Mercyhurst University in 2007 and was at the time known as Tiffany Titus.
His prime motivators for his political race were to carve out a space for LGBTQ people in public office and give younger LGBTQ citizens a voice in their education.

The night started out with Titus discussing his life and the path to his transition.

Before his transition, Titus came out as a lesbian to his family and friends. While attending Mercyhurst, he suffered seriously with depression. He believed coming out would solve the problem; however, he still felt something was wrong.

“The word transgender didn’t exist in my hometown of Titusville,” Titus said.

After referral to a counselor, Titus finally realized the vocabulary for what he had been feeling. He wanted to pursue life as a man.

“I learned a language that wasn’t available to me,” Titus said.

Now Titus advocates for LGBTQ rights and to further visibility to those who are not as exposed to their options as his younger self. This includes specifically ensuring transgender visibility in the public realm.
Titus had a message for anyone who identifies as LGBTQ: “I think it is critical for those of us who can be out to be out.”

However, he had just as important of a message for all allies.

Days like Transgender Day of Visibility can be crucial to young people with limited support systems and education about sexual orientation and gender acceptance. This is SAGA’s first major event for this day due to the fact that they generally commemorate Trans Day of Remembrance instead. However, the officers this year felt there was certainly room for both.

Karcher asked the panel questions regarding Mercyhurst’s history with LGBTQ rights as well as stories from personal experience with their sexuality or gender identity.

McCarty recalled his experience of incorporating transgender rights into his ethics and clerical work. He was met with great hostility and even called a heretic by his church.

“When you stand up against things that are contested, it becomes scary,” McCarty said. However, he recognizes that advocacy work is more important than fear and continues work as a clergyman.

Ashcraft’s son Ryan is a transgender man. Ashcraft was unsure at first but after seeing how certain his son had become about his identity, his views shifted and he became an advocate for Ryan. Ashcraft now describes himself as “the proud parent of a trans person.”

The panelists also discussed how much Mercyhurst has incorporated LGBTQ visibility on campus. Most of the panelists recognized how welcoming MU has become, with Titus saying he saw a huge difference since his graduation.

McKenna spoke about creating a space on the hub where students can report anonymously if they encounter discriminatory behavior. McGurk noted the improvements she has seen over the years with students being more open to people different from them.

Perhaps one of the most touching moments of the night was when Titus explained how his children reacted to his transition. Titus gave birth to two boys while he was Tiffany. After transitioning, his children are fully supportive of him.

Titus recalled a story where his youngest son was jumping on a trampoline excited about the prospect of having a father.

Titus said that every time his son would jump in the air, he would say “My … mom … is now … my dad.”
“I became his show and tell item,” Titus said with a giggle.

Titus certainly opened many people’s eyes and hearts with his speech.