Thumbs Up for Autism 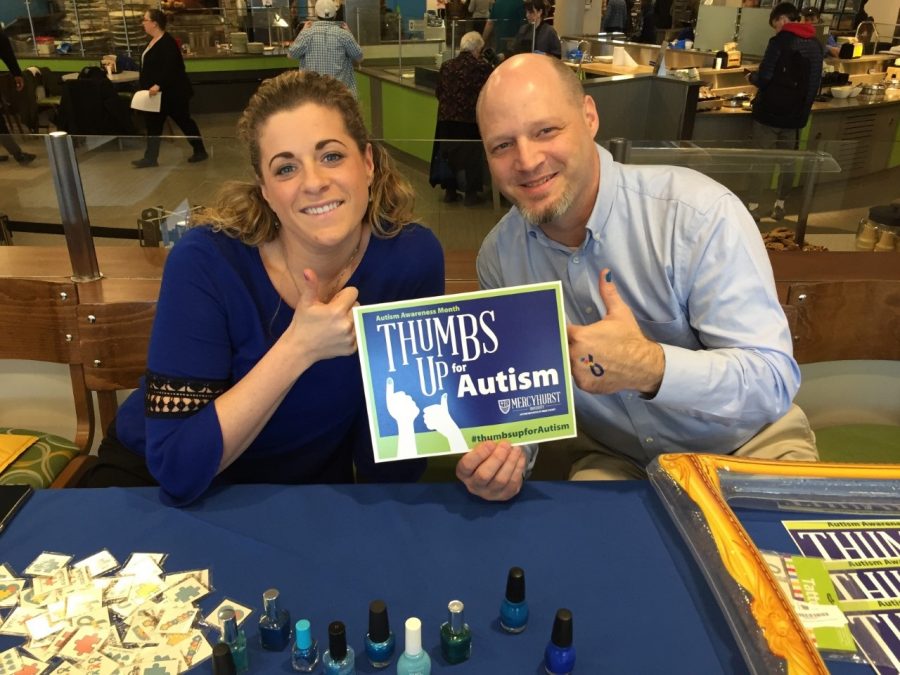 To celebrate, the AIM program kicked off with the lighting of the O’Neil Tower in blue and hosting a “Thumbs Up for Autism” event at lunch in the Grotto Commons on April 1.

Brad McGarry, director of the Autism Initiative at Mercyhurst, conceived the “Thumbs Up for Autism” event leading up to April. The plan is to continue the movement throughout the month.
“In past years we did an art project, but we are running out of wall space, so I decided we can do art work that is mobile that also raised awareness and support for folks on the spectrum. That led to Thumbs Up for Autism,” McGarry said.

“Mercyhurst students always step up when it is to support a good cause,” McGarry said. “We are so grateful for the support our program and students have received by the Mercyhurst community and far beyond.”

Students enjoyed seeing the event at lunch and found that there was a lot of support for Autism Awareness Month.

“It was so cool to see both students and staff showing their appreciation not just to the AIM Program, but also recognizing the larger picture that there is a feeling of growing change in the way people in the general public may view those who are on the autism spectrum,” said June Durkee, sophomore Hospitality Management major and member of the AIM program.

The AIM program has many events planned for April aside from Thumbs Up and the O’Neil Tower being illuminated in blue all week.

Representatives of the AIM program attended World Autism Day on April 2 at the United Nations headquarters in New York City.

McGarry, Wielandt and AIM are co-sponsoring a viewing of the nationally acclaimed documentary “This Business of Autism” at the Capitol Theatre in Washington, D.C., on April 9.

Several students in the AIM program will also travel to Washington, D.C., to participate in a vocational exposure experience meeting with corporations, lawmakers and advocacy groups. The month’s festivities will conclude April 27 with the AIM Appreciation Dinner.

“I believe it is important to celebrate Autism Awareness Month because I feel the general public does not have a solid grasp on what types of functions play a role in a person with autism,” Durkee said. “I feel it is very important that throughout the month we are able to have a safe platform to speak our voices and share our personal stories on how autism has shaped us into the people we are today.”

McGarry believes in continued support and awareness for those on the autism spectrum because of how much it affects not only everyone at Mercyhurst, but those all over the world in higher education.

“It is important to continue to support because we are having record numbers being diagnosed and also entering higher education,” McGarry said. “The more people are aware, the better the experience is for everyone.”

Durkee expressed her gratitude for the continued support from the AIM program and Mercyhurst as well as the events and advocacy that will be happening throughout April.
“I am forever grateful to the folks within the AIM Program who have given students like me endless support from the sidelines and appreciate how they are so caring to all of the students and seeing us succeed while on a close-knit college campus like Mercyhurst,” Durkee said.