Keiko Miller, assistant professor of World Languages and Cultures, will be receiving the Educator of the Year award from the Pennsylvania State Modern Languages Association (PSMLA).

Miller, known as Keiko-sensei to her students, has been teaching Japanese language and culture at Mercyhurst College for 23 years, as well as volunteering in the community with English as a Second Language in Head Start, Literacy and Adult Education Programs throughout her career.

“As a teacher of the foreign languages, I get a joy when I see students engaged,” Miller said.

Miller’s teaching philosophy is centered on authenticity, guiding students in a way that allows them to find the desire to learn themselves.

Junior Elizabeth Abernathy took Miller’s Far Eastern Ideographs course based on the use of Chinese calligraphy in the Japanese writing systems.

“With Keiko-sensei, it is less the ‘how’ and more the ‘why,’ which is an interesting take on learning languages,” Abernathy said.
“She forces you to make connections on your own while learning sentence structure and grammar, which allows the student to better understand the reasons behind the language structure in the first place.”

This is a story that is repeated by many students who take her class. Students are engaged in learning and having fun while doing it. 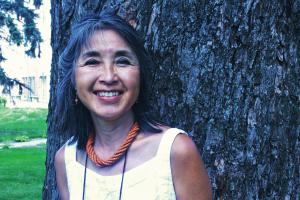 Jill Barrile photo: Keiko Miller will be receiving the Educator of the Year award from the PSMLA in October.
Junior Molly Gavin, who also took Far Eastern Ideographs, said, “She was kind of relaxed, and you could tell she really enjoyed what she did, so she made it easier for the rest of us to become enthusiastic.”

Many students not only learn the Japanese language from Miller, but they also enjoy her stories about growing up in Japan.

“I feel that in modern times we don’t have the kind of struggle that we used to have, so when the student comes in to learn a language, you have to create a medium space for them to have some kind of bodily struggle,” Miller said.

When asked about receiving this honor, Miller said, “I am completely surprised by this award because I don’t have any expectation for what I do, but when I see the task complete that I was part of that, then I feel rewarded.”

Miller will receive this award on Oct. 21 during the PSMLA conference at State College.