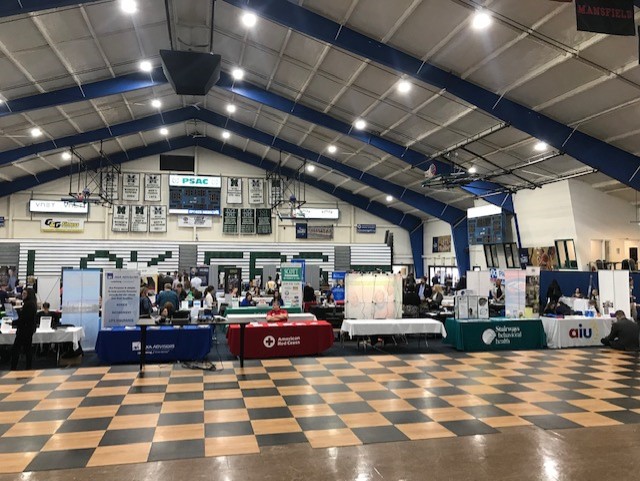 Mercyhurst’s annual Career Fair provides job and internship prospects as well as professional practice in networking for students each year.
The fair took place in the Mercyhurst Athletic Center on April 4 from noon to 4 p.m.

Organizations such as Penn State Behrend, Taco Bell, the American Red Cross, the Catholic Diocese of Erie, BNY Mellon, the U.S. Department of Homeland Security and Erie Insurance Group were in attendance, scouting for potential employees and interns.

The Career Fair provides students with an opportunity to explore possible career paths and demonstrate their professional skills to employers.

Heather Balas, director of the Career Development Center, organized the event. She said she finds great value in the opportunities it provides for students.

“There is something at the fair for everyone,” Balas said. “Even if you aren’t ready to job search yet, you can have your résumé viewed by an employer and see what they think about it. Practice your elevator pitch over and over again.”

Students such as Maria Ortega, a senior English major, understand the numerous perks that the Career Fair provides for someone on the hunt for jobs after graduation. She has attended the career fair every year and falls more in love with the companies she goes to.

“I want a way to present myself professionally to people,” Ortega said. “But there is also an opportunity for me getting an interview or a job.”

The entirety of the Career Development Center coordinated the event, along with help from Academic Support.

“It takes a village to run these things, but they’re fun,” Balas said.

This year, about 150 students attended the fair, a little less than in previous years. There was steady traffic from students throughout the event. While there was not congestion, the vendors noticed a difference in the usual turnout rate.

Kerry Fels and Michelle Rits from the Marriott Cleveland booth noticed the numbers.

They said that while the students were receptive, there was a slower turnout this year than in previous years.

Balas predicts that this is due to scheduling conflicts with the students as well as marketing tactics for a new generation of students.

“Our students are very busy. That makes it difficult to fit things in,” Balas said. “We’re seeing a new generation, and a lot things are being marketed in a way millennials wanted to see things. We need to revamp and think how we can attract our current students and the way we market to students.”

To help improve turnout rates for years to come, the Career Development Center has implemented a new app called Handshake.

This career networking app for college students was employed to assist students in getting their credentials to the public. In the vein of LinkedIn, Handshake’s interface is based on social media apps like Facebook.

Career fairs are also run through the app, allowing students, organizations and companies to connect and attend local opportunities. The app had a test run through Mercyhurst and was well received by the students.

“Students who are on Handshake can take advantage of that resource. They are able to go in and see who’s registered for the fair, look at their company pages to see who’s working there and what jobs are open,” Balas said.