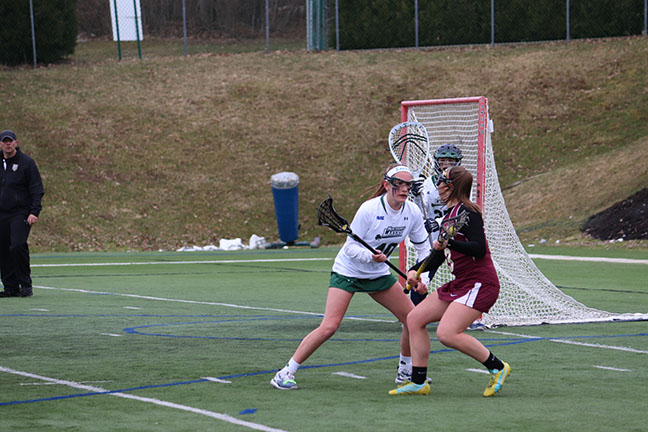 Mercyhurst’s No. 10 Paige Cocina blocks Gannon University’s No. 3 Caroline Mauck during their April 2 contest at Tullio Field. Behind them, No. 25 Kaitlyn Lippert is in goal for the Lakers.

After running into their first three-game losing streak since April 2013, all the Lakers needed to do was get back to Tullio Field and return to their high-octane play that has suited them masterfully for this entire decade.

The Lakers avenged last year’s Top 25 loss at Lock Haven Unversity by splitting 15 goals on opposite sides of intermission on Saturday against their archrival, the Lock Haven Bald Eagles. Earlier in the week, a nine-goal first half against the Gannon University Golden Knights proved to be the catalyst for this current hot streak, with a 16-4 rout by the Lakers.

“We need all the wins we can get now,” Netti said. “We can’t afford to lose much any more, so this was a good bounce-back game.”

The Lakers got off to a typical quick start against the Golden Knights (2-8, 0-6) with Netti finding her favorite target in Emma Hubert twice in the opening three minutes. The Golden Knights’ defense then clamped down. Golden Knight Alexa Bower responded with a score to get on the board.

After the Bower won the ensuing faceoff, Laker Goalie Kaitlyn Lippert got her hands on a loose grounder and launched it into a clear that eventually found Brenna Fosco with 8:21 before half, sparking a dominating Lakers possession for the rest of the half. A save on Erin Rotondo launched into a clear with the Lakers’ Kira Kolb and Marissa Comerate launching shots wide before Erin Renwick (2-7, 14.58; now 2-8, 15.25) stopped Hubert before Netti cleaned up the rebound. Then Angelina Simon coaxed Eileen Kehrig into a turnover before finding Hagen 52 seconds later, then Hagen for a Hubert score with 2:49 left in regulation.

Paige Cocina then scored for the Lakers, then assisted Payton Cook to round out the half. That seven-goal lead would only inflate when Cook opened the second-half scoring 3:47 in, but after Lippert stopped the Knights’ leading scorer in Rotondo, Hudak picked up the loose grounder allowing the Golden Knights’ Rachel Tufts a score.  But Kolb won the ensuing draw, and Netti regained posssession and coaxing Emma Ivory into a giveaway, then finding Hubert before a Cocina score 50 seconds later.

Tufts then had her second in less than eight and a half minutes for the Golden Knights, but Cocina responded a minute later for the Lakers. A clear off a stop on the Golden Knights’ Bower once again allowed Netti to play favorites before she drove home the last two of the game unassisted, ending the game for a Laker win.

Against Lock Haven (3-8, 1-5), Netti needed just 1:16 into the game to find Hubert for her first of six on the day, before Bald Eagle Caitlin Morrow responded three minutes later. “We had our offense generate a lot of points, and we pushed the ball really well,” Netti said.

Hubert and Netti connected again at 6:27, and then Netti scored unassisted. The Lakers’ Brenna Fosco then got into the action, finding teammate Julia Rescott at 15:04 before Hubert and Netti combined again to precede Morrow doing the same with Kate Hooper at 18:56 to take the deficit back to three.

But the Lakers’ Fosco responded and found Marissa Comerate with 4:28 left before half to retake the four-goal lead, though the Bald Eagles’ Reddinger coaxed Laker Molly Meegan into a turnover and a score by Morrow. Comerate then responded for the Lakers by finishing off her first career hat trick unassisted on opposite sides of intermisison and beating the Bald Eagles’ Lauren Girardi (1-5, 15.57) a minute into the second half.

But after Girardi stopped the Lakers’ Kolb three minutes later, Bald Eagle Reddinger benefitted from the clear and sandwiched two goals between a Hubert-Netti Laker connection. Rescott then responded 39 seconds after Reddinger’s second goal with a grounder.

From here, the Lakers maintained command of the scoreboard, with Comerate, Hubert, Rescott and Meegan each getting one more score. Two tallies from the Bald Eagles’ Hooper rounded up the scoring, with the Lakers finishing their comfortable lead 15-8.