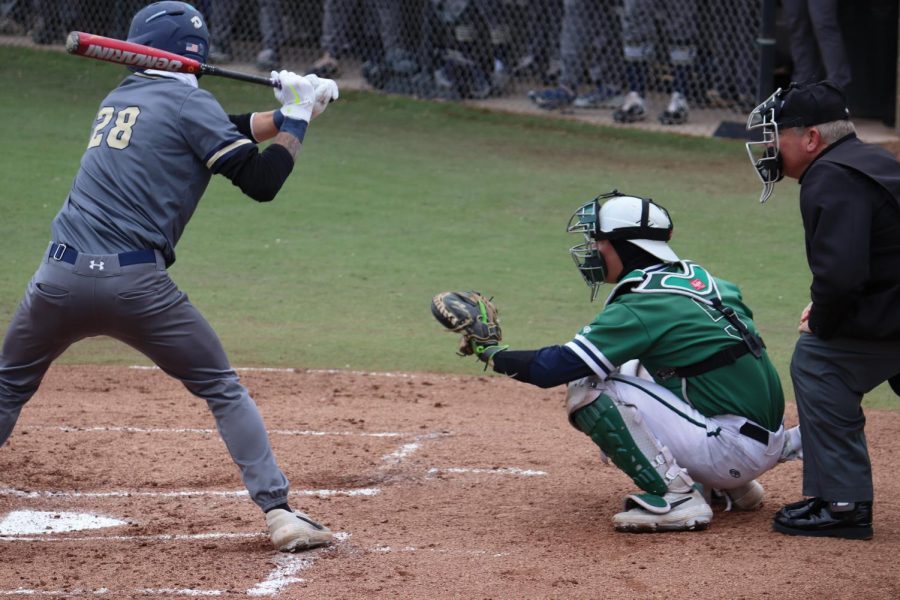 Mercyhurst hosted the Clarion University Golden Eagles for a doubleheader on April 27 at the Mercyhurst Baseball field. The Lakers entered the contests following a previous weekend sweep of Slippery Rock.

With Pennsylvania State Athletic Conference (PSAC) season almost coming to a close, the Lakers were in two tightly fought games against the Golden Eagles, winning them both. In the first game, head Coach Joe Spano handed the ball to Christian Young, who pitched well in the Lakers’ victory. The Laker batters went in order in the bottom of the first, however, next inning the bats woke up as they tallied three runs.

Matthew Schneider led off the frame for the Lakers with a single, and teammate Josh Surowiec walked. With two outs, Luke Baranchak ripped a single down the first base line, plating Schneider, while Surowiec came home on an error by the right fielder. The Lakers were not done as Zach Mitchell lined a doubled, bringing Baranchak home, extending the lead to 3-0. At one point, Young retired 10 consecutive Clarion hitters, yielding only two baserunners from a single and a walk.

During the fifth inning, Young allowed five straight singles with no outs, resulting in three Clarion runs, tying the game at 3. Young managed to get out of trouble, keeping the score intact. The Lakers regained the lead at 4-3 in the bottom half when Zack Mitchell scored and Alex O’Donnell singled with two outs. Jared Kapturasky worked the sixth and seventh for the Lakers, striking out four and giving up two runs.  Kapturasky held the sixth and the Lakers plated six huge insurance runs during their frame.

The biggest hit came from Matt Gibson, lacing a ball for a two-run RBI double, and sending Dominic DeRenzo and Zach Mitchell to the plate. Kapturasky began the seventh with a seven-run cushion, but allowed two Golden Eagle runs with two outs. The Lakers eventually earned a 10-5 victory over Clarion, looking to take the sweep.

Matthew Minnick pitched the second game for the Lakers and dominated Golden Eagle hitters. Minnick set down the first eight batters, striking out six and allowing a measly run in the third. Two innings prior, the Lakers tacked on two runs, with one swing by Schneider, trotting around the bases with O’Donnell. In the bottom of the third, the Lakers received timely hits from Schneider, driving in Jack Elliott with a sacrifice fly, and O’Donnell, scoring on a Surowiec doubled, making it 4-1.

The Golden Eagles cut the deficit in half to 4-2 by tallying a run from a sacrifice fly. Dominic DeRenzo joined the hit parade when he drilled a homer to left giving the Lakers a three-run cushion. Minnick looked composed and comfortable on the mound during the fifth and sixth frames. During those frames, he allowed one baserunner from a walk and added three strikeouts to an already climbing total of seven.

“Matt’s a real competitor. He is really been our glue guy this year, who was able to get through six and hand it off to Adam Jeannette,” Spano said.

Jeannette entered the seventh inning in purist of earning the save and a Lakers’ sweep. He only faced three batters, striking out two of them, and produced a ground out, completing the sweep of Clarion on on the Lakers’ Senior Day.

The two victories improved the Lakers’ overall record to 26-8 and PSAC West record to 13-5. The Lakers are currently in a three-way tie for first place with California University of PA and Gannon. The Lakers have a pivotal doubleheader against Gannon this weekend to determine the No. 1 seed for the PSAC Tournament.