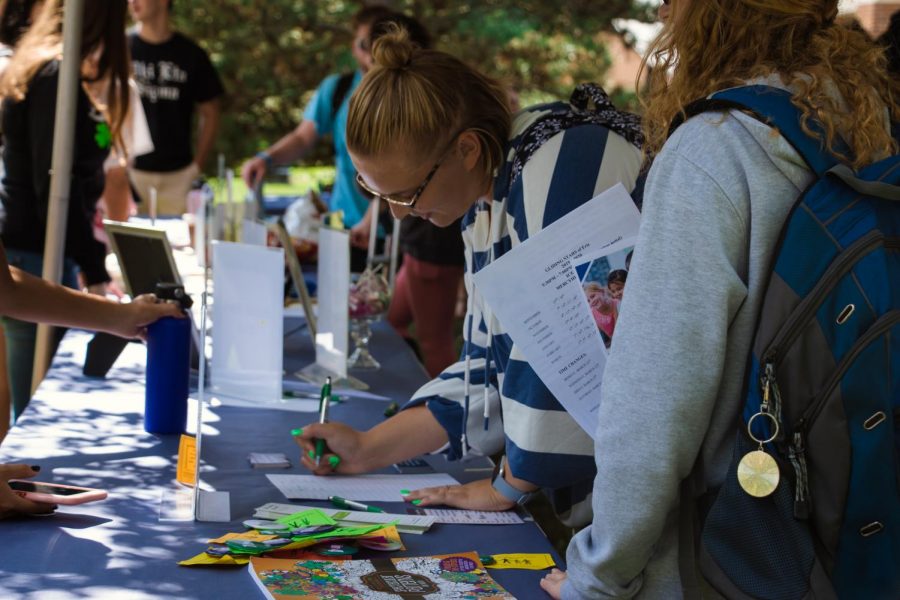 On Aug. 23, dozens of Recognized Student Clubs and Organizations (RSCOs) were present at the annual Fall Involvement Fair.

Over 80 different recognized organizations were present at tables throughout the fair including MSG and MAC/SAC, Student Ambassadors and Campus Ministry.

Although the Fall Involvement Fair is targeted more towards giving new freshmen a chance to get involved, it also gives upperclassmen the chance to see the exciting clubs that have formed since their freshman year.

Whether an academic club such as Laker Asset Management, or  those recreational in nature, such as Badminton Club, prospective members can easily wander down rows of tables filled with a vast number of clubs that suit one’s interests.

Campus Involvement Center’s Leadership and Outreach Coordinator Steph Prezepiora organized the outside involvement portion of the fair with the support of her colleagues.

The indoor service component of the fair was coordinated by the Assistant Director of Community Engagement, Bethany Brun.

When comparing the fair to the Fall and Spring involvement fairs from last year, “It definitely was less crowded, but that is because we have fewer RSCOs this year since some RSCOs became inactive after Spring 2019,” Prezepiora said.

Clubs risk inactivity when the president and fellow officers from any given club graduate or no other members retain an interest in continuing it.

“This means things were able to be a bit more spread out, so even if we had the same number of people visit, it would still feel less crowded,” Citriglia said. “There were definitely more signups than in the spring.”

“Still there were several times during the event while I was walking around taking pictures that I actually couldn’t enter the largest tent because there were so many people in it,” Prezepiora said.

Club officers generally agreed with this.

Citriglia said,“The involvement fair had a great turnout. The Badminton Club filled out both sides of our sheet and half a piece of paper.”

Although there were not any new clubs present at this year’s Fall Involvement Fair, Prezepiora has had several students visit her office planning to start new clubs.

“You can look forward to seeing some of those new clubs start soon,” she said.

For those interested in joining the aforementioned Badminton Club, contact the club president Hannah O’Brien or Citriglia. No experience is required and everyone is welcome.

“We are currently trying to hold a tournament every semester to raise money for charity. Other than that we plan on meeting once a week to play casual badminton,” Citriglia said.

For those who missed the fair, at www.mercyhurst.edu/clubs, students can find a full list of active RSCOs as well as contact information for the advisor and officers.

The Weekender page on Mercyhurst’s Hub also contains a calendar of events including the meeting times of any event registered with the Campus Involvement Center.

To find general information about getting more involved in and around campus, students are welcome to find Prezepiora in the Involvement Center.