MU Athletic Band for the win 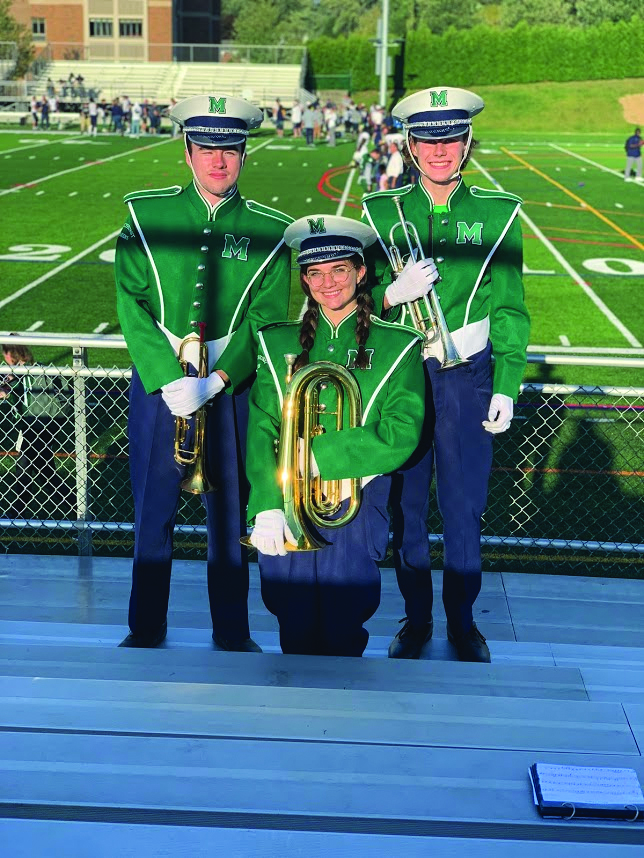 Before the fall semester even started, the Mercyhurst University Athletic Band was hard at work putting together an amazing halftime show.
From August 9 to 16, the band spent their last bits of summer tirelessly practicing for upcoming games and exhibitions.
Under the student leadership of Lauren Tucci, senior Music Education major; Greta Stoner, sophomore Music Education major and Emily Zbrzezny, senior Music Education major, the band readied themselves for the upcoming season.
The Mercyhurst Athletic Band consists of 76 total members.
They are led by three drum majors and two commanding officers.
The drum majors lead the band on the field and during the games, while commanding officers lead at the tailgates.
The 76 members are divided into five smaller sections: percussion, high brass, low brass, woodwind and pit.
Percussion consists of snare drums, bass drums, quads and tenors.
Low brass has trombones, tubas and a baritone, while high brass has mellophones and trumpets.
Woodwinds are made up of alto, tenor and baritone saxophones, clarinets and flutes.
Separate from the main ensemble, the pit consists of a drum set, a xylophone and a marimba that play at the front.
They are led by Bob Reid.
Fans will be able to watch the athletic band perform at all Mercyhurst football games at Saxon Stadium.
They will be attending one away game at Clarion University in Clarion, Pennsylvania, on Nov. 9.
At the home games, you can expect a Laker worthy show by the athletic band.
They begin with our Alma Mater, followed by a valiant performance of “The Star Bangled Banner” and our fight song, which uses the tune of “Anchors Aweigh.”
After each touchdown scored by the Mercyhurst team, they play the fight song to show their Laker pride.
The halftime show is a much-anticipated tribute to the band Queen.
As the second quarter comes to an end, they march onto the field and take their places where they have practiced many times before.
The show begins with a medley, which is a piece that seamlessly mixes multiple songs.
The medley starts with Queen’s most iconic hit, “Bohemian Rhapsody,” and effortlessly flows into “Another One Bites the Dust” and “We Will Rock You.”
It ends with the last bit of “Bohemian Rhapsody.”
After the medley, they pick up with “Fat Bottomed Girls” and “Crazy Little Thing Called Love” and end with the fitting song “We Are the Champions.”
Catch this epic tribute at our homecoming game on Sept. 21 or any other home game.
When the game comes to an end, whether with a win or a loss, the band serenades the football team with the Alma Mater and the fight song.
Other than on the field during football games, you can find the athletic band at hockey and basketball games here on campus showing support for our student athletes.
To recruit new members they go to exhibitions where they play for high schools to entice their students to make Mercyhurst University and the Athletic Band their home.