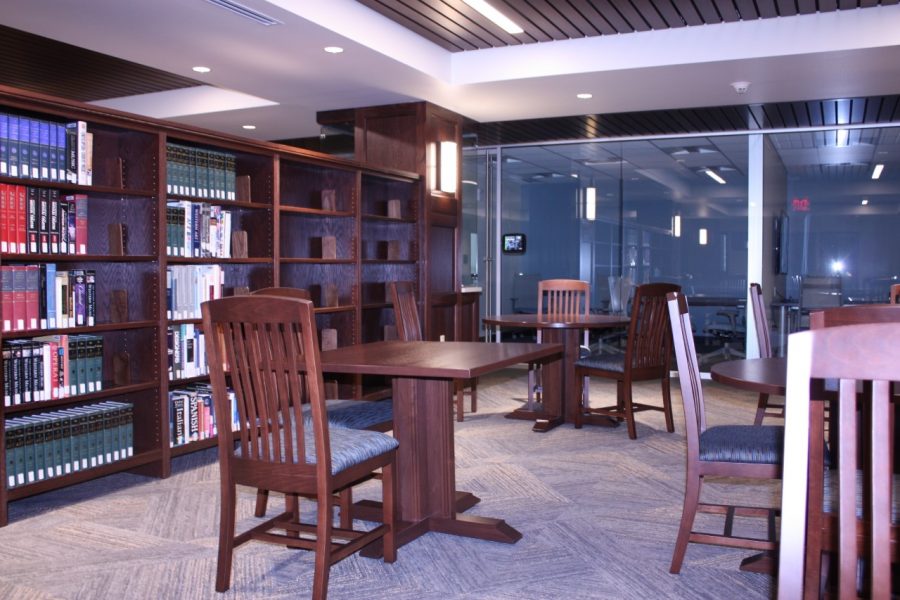 This summer the university was busy with renovations. Some of the bigger and more apparent ones include the first floor of the library, Saxon Stadium and the Ice Center. Other renovation projects are underway.

“The library has been a longer term project. Really, the first part of the library started with the cyber lab and all the work they did in the basement last year. And then they moved up to the first floor this year,” said Laura Zirkle, Ph. D., vice president of Student Life.

The planning for the library began several years ago and started with the cyber lab. The first floor renovations began a year later in the beginning of June and were finished in early September.
Another new addition to campus was the sport court by Ryan Hall on Briggs Ave. When the demolition to Briggs Ave. buildings was done to make room for Ryan Hall, an old sport court also had to be removed. This court was a gift from an alumnus, so the university wanted to replace it.

“From the time we took that out, we knew we wanted to put something similar back in,” Zirkle said.

The planning of the sport court started mid-winter last year. They had thought of just putting the same court back in, but previous MSG president, Vincent Marrazzo, ‘19, showed them what could be done. The sport court there now was decided back in February and constructed in the summer so it would be done when the students came back.

“We had a little bit of hold up because we had to get the grass growing around it,” Zirkle said.

Zirkle wanted to thank everyone for their patience, support and understanding. She also encourages people to come check it out, get involved and be a part of it.

The plans for the athletic renovations were years in the making as part of the Laker for Life Campaign that was kicked off last spring.

“I was fortunate to inherit great plans and made some small tweaks before we finalized and began construction,” Brad Davis, Mercyhurst Director of Athletics, said.

Davis was directly involved in each athletic renovation project. He said many administrators have been involved but would like to personally recognize Ryan Palm, associate vice president for Advancement.

“Ryan has worked in step with me every step of the way and has been a huge help for me throughout this process,” Davis said.

The Laker for Life Campaign was a $9.5 million dollar campaign geared toward the renovation and construction of these facilities.

“We have received numerous donations from many significant donors, including John and Patty Saxon, Owen McCormick and Bill and Betsy Vorsheck,” Davis said.

Saxon Stadium and the Ice Center have been newly renovated. The stadium got lights so games can now be played at night for the first time in a decade.

Many of the athletic renovations still in motion will be completed by the end of fall. They include upgrades to the baseball field and four new locker rooms.

“We will begin construction on a new lighted turf field on the hill to be shared with Mercyhurst Prep later this fall. It will be the primary new home for our softball team,” Davis said. “Our next plans include renovations to the Athletic Complex and the basketball facility, the fitness center and adding chair backs and VIP space in the Ice Center.”

Another upcoming renovation to campus will be the student-focused space in the Laker Inn called “Luke’s Landing.”

“Luke’s Landing was an MSG initiative,” Sarah Allen, executive director of Campus Involvement, said. “The idea came about after seeing the popularity of The Roost and the want by MSG, to give students who are under 21 a place to hang out and enjoy weekend entertainment.”

Luke’s Landing will be located in the lower level seating area in the Student Union next to the Laker Inn. The projected delivery date is Friday, Sept. 20, with a grand opening to follow hosted by MSG.

“We are extremely excited to reveal this new space to students and will have more information shared on our social media pages (@msgLakers) and around campus, in the coming weeks,” Abby Staub, MSG President, said.

Students will be welcomed with a ribbon-cutting ceremony to showcase the collaborative space where students can now dine, study or just hang out together. The intention of Luke’s Landing is to be a complementary space to The Roost and Laker Inn.