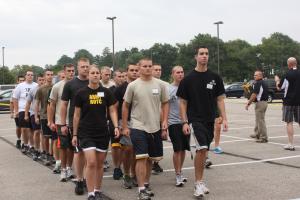 Photo contributed by Catherine Felder: Students from Gannon, Behrend and Mercyhurst were at Behrend on Friday, Sept. 9, for an ROTC orientation lab.

Cadet Steven Marrocco, a Buffalo native and senior at Mercyhurst College, is the Cadet Battalion Commander of the Pride of PA ROTC Battalion and captain of ROTC’s Ranger Challenge team.

This means Marrocco is the highest-ranking cadet in the battalion, and his responsibilities involve “everything the battalion does or fails to do,” said Marrocco. “As the cadet Battalion Commander, I oversee all cadet leadership and give guidance and instructions to fellow cadets to ensure all ROTC events and training are completed and successful.”

The lab, which consisted of three displays for new cadets, included the Battalion’s Ranger Challenge team’s demonstration of using a rope bridge and the proper techniques for entering and clearing a room in a Close Quarters Battle environment.

Next was the color guard team’s demonstration of the correct manner and uniforms in which a four-man team post the American Flag and Army Flag at special events. Following was a Stryker demonstration provided by the 1-112th Stryker Battalion in Cambridge Springs, Pa., in order to familiarize the Cadets with military vehicles.

“We finished the event with relay races between schools and several tug-of-war matches in order to build esprit de corps. Before dismissing all cadets, we conducted an awards ceremony to recognize all cadets who demonstrate excellent proficiency in summer training, academics and physical fitness,” said Marrocco. “Overall, the orientation was very successful and ran smoothly.”

Cadets who attended commented that the event was a fun learning experience, with the event’s success resulting from the hard work and dedication of senior cadets and cadre.

“The event was only the first among many future Pride of PA Battalion training events focused on transforming successful students and athletes into Army officers and trained leaders in the greatest military in the world,” Marrocco said.

Mike Gallagher is member of the Pride of PA Battalion.