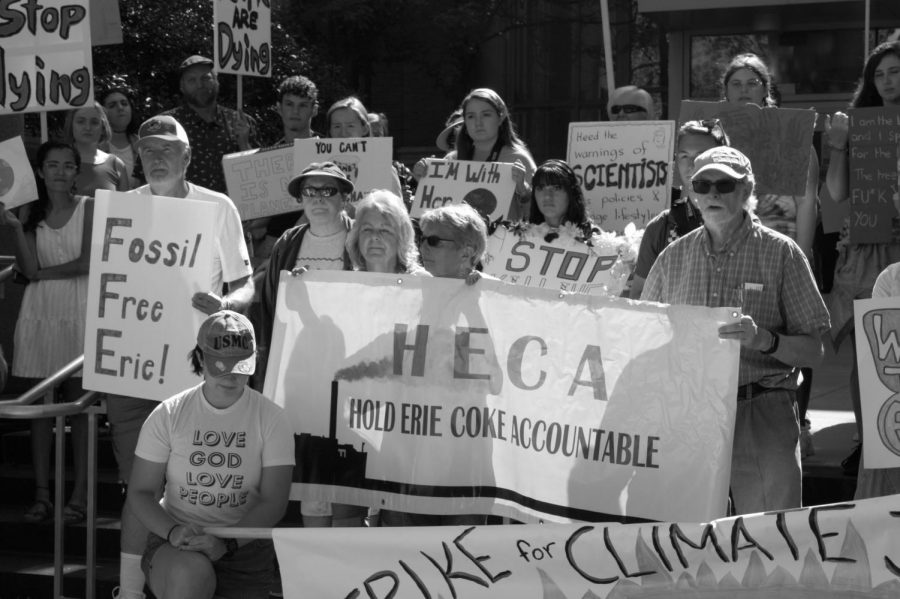 The Erie Coke coal furnace plant at the bottom of East Avenue has been a continuous point of contention in the Erie area for years. This year, the company has faced uncertainty about their future in Erie as the Department of Environment and Planning denied their renewal for their Title V operating permit. After consistently neglecting environmental regulations, the DEP sought to shut down the coke plant by filing for injunctive relief in Erie County Court this summer.

Many in Erie are troubled by the environmental implications of the coke plant, as it is positioned on the coast of Lake Erie, just mere feet from the water table. The area is a local hot spot for fishing, with the East Avenue Boat Launch bordering the plant to the east. On Aug. 28, Erie Coke was issued a $200,000 fine for mismanagement of wastewater.

The proximity of the plant to the lake and water table is a major concern for Mercyhurst’s own Mike Campbell, Ph. D., who has studied the area surrounding Erie Coke for years. Campbell is a leading member of the local organization Hold Erie Coke Accountable, HECA, a group devoted to pushing Erie Coke to “clean up its act.”

The emissions from the plant are monitored 24 hours, seven days a week by the DEP, and are known to test positive for benzene. Long-term exposure to this chemical can lead to red blood cell and bone marrow damage, and cancer. The plant, which produces a coal derivative, has been slammed with numerous warnings and fines over the years for violating environmental regulations; most of which have yielded no significant change by the company.

The goal of HECA, as listed on their website, is to “hold Erie Coke accountable for the pollution they have expelled into our water and air that is harming our citizen’s health, our environment and our local economy.”

HECA welcomes citizen science and the firsthand accounts of people who have had experiences with the plant in order to put pressure on the DEP to tighten regulations on the plant.

Representatives of HECA were present at the Sept. 20 Climate Strike, in an effort to show their support and bring local awareness to their cause. This is not the first time people have engaged in peaceful protest against the plant. In 2018 the People’s Climate March began outside the gates of the factory in protest of the harmful benzene emitted by the plant each day.

Efforts from HECA have contributed to the ongoing pressure put on the coke factory to make significant changes. Due to the continued effort by local activist groups, the Erie Coke plant may have to shut its doors permanently if they choose not to reform, a fate shared by the plant’s sister factory, Tonawanda Coke in New York state. Tonawanda Coke, which was managed under the same people who manage Erie Coke, was forced to close in October of last year after a lengthy history of legal infractions and violating the Clean Air Act.

For now, it seems as though the company will be allowed to keep their doors open as long as they abide by the lengthy list of conditions set forth by Environmental Hearing Board Judge Steven C. Beckman. The renewal of Erie Coke’s Title V operating permit is still in question for the time being, and Beckman’s operating conditions for the plant will remain in effect until Erie Coke can appeal the DEP’s denial of a new operating permit.