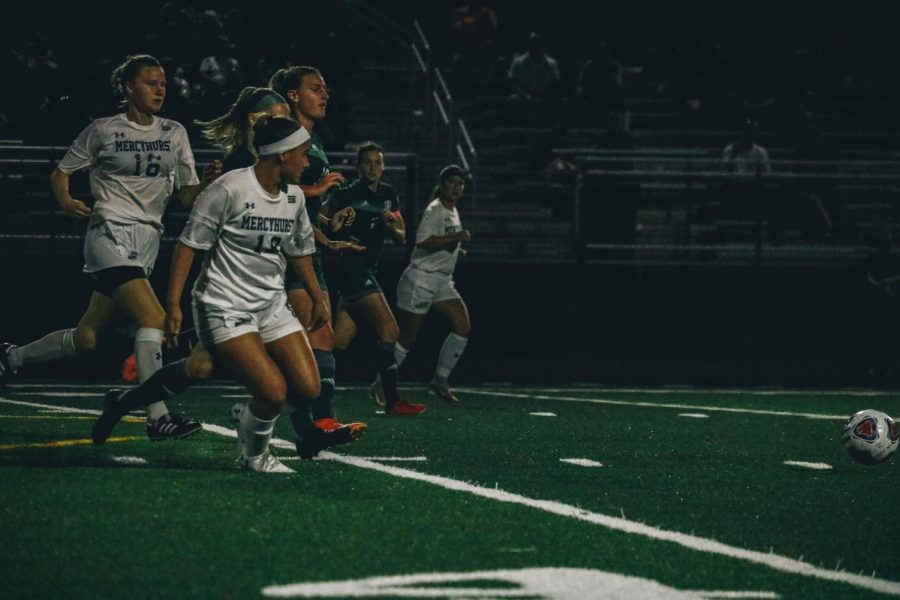 No. 18 Kenzie Grenell and No. 16 Beata Sandling run alongside players from Slippery Rock University towards the ball. The Lakers fell 1-2 in that game, coming off a 3-0 victory against Gannon University.

Starting the season with games against nonconference opponents, the Mercyhurst women’s soccer team had their first series of games this week against Pennsylvania State Athletic Conference (PSAC) opponents.

The first of those such opponents were the Gannon University Golden Knights in a Sept. 18 night game. Mercyhurst blanked the Knights 3-0.

“We really came ready to play,” senior midfielder Maya Bauer said. “Our team hasn’t beaten Gannon in a year, so we wanted to change that. Obviously it is a huge rivalry for us, so emotions were high as always, but we did a good job of settling down when we got the lead and keeping our composure through the remainder of the game. We didn’t concede a goal, which was a massive positive for us.”

The Lakers went up in the first half, with a goal coming from freshman forward Alyssa Otto 29 minutes and six seconds into the game. Otto would score a second goal soon after the start of the second half at 46:31.

Senior Maia Russo scored the final tally for the Lakers at 64:41.The Golden Knights ended the night scoreless, shut out by Laker senior goalie Vilde Wold, who recorded three saves in each half for a total of six.

Coming off of their victory, the Lakers next played Slippery Rock University on Sept. 21.

“We were about three minutes away from beating a high ranking team, and giving up that first goal came from not taking care of the details,” Bauer said. “You can’t slow down for even a minute against PSAC teams, or else you’ll pay for it. There were some sloppy mistakes made at the end of the game that led to our overtime loss. However, the fact that we played so well against them is promising. I felt like we absolutely dominated them in terms of passing second half, which gave us the momentum we needed at the time. I’m looking forward to meeting them on the field again.”

Otto once again scored the first score of the game at 51:29. Slippery Rock managed to score with under four minutes remaining, tying the game until the clock expired. Slippery Rock found the net in overtime, resulting in the Lakers’ loss.

Next on the Lakers’ schedule was a Sept. 23 game against the Edinboro University Fighting Scots, a makeup for a canceled contest on Sept. 11. The Fighting Scots took the lead on the Lakers by two goals (49:09 and 71:14) and ultimately won the contest, 2-1. The Lakers’ Laia Santos scored the single goal for the Lakers at 86:23, minutes before the end of the game.

Next on the Lakers’ (2-2-1, 1-2-0 PSAC) schedule is a trip to University of Pittsburgh at Johnstown (1-2) on Wednesday. The Lakers will return to Saxon Stadium for homecoming weekend, playing Seton Hill University in a 7 p.m. game Saturday.

This season has been an absolute joy so far,” Bauer said. “We have a great group of talented girls, and it is extremely competitive even within our team to get minutes. We manage this well though, because the competition doesn’t drive us apart. We are each other’s biggest fans, and the team-first mentality gets us through the hard times together. A major team goal we have is to make it to the conference playoffs. It hasn’t been done since I’ve been here and based on what I’ve seen from our team so far, I think it is very possible if we keep working to improve. People are talking about our team for the first time in a while, and that feels really good. We’ve been getting more support than ever from fans and it doesn’t go unnoticed, we appreciate it so much.”