Football makes a point to take away cancer 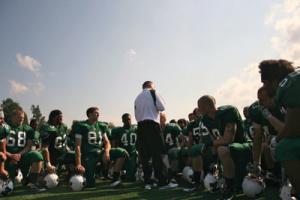 File photo by Ethan Magoc: Coach Marty Schaetzle and the Lakers look to have another outstanding year, and add to the donation totals.In a world where technology and medicine changes daily, cancer is a continuing illness that seems to escape the grasp of modern medicine.

Cancer affects millions of people in some form or another. According to the American Cancer Society, nearly 1.6 million new cases of cancer are expected this year alone. However, some places seem to be affected more directly than others.

In an effort to help combat cancer, Head Coach Marty Schaetzle has created a campaign called “Make a point to take away cancer.” Schaetzle will donate $1 for every point and $5 for every takeaway the Lakers get during the season. This will be the second season for the campaign.

This year, 8,290 people have been diagnosed with testicular cancer. With the help of Schaetzle’s campaign, those numbers can begin to go down.

In 2010, the Lakers recorded their best season in program history.

Their best season came at an excellent time. With a potent offense and one of the best defenses in the conference, the Lakers amassed 354 points, 21 interceptions and recovered nine fumbles. Those totals were good enough for a donation of $504 and the college program matching coach Schaetzle for a grand total of $1,008 just from the team.

“The more good things we do as a team on the field, there is a carryover. We hope we can get more people involved and raise even more money,” Schaetzle said.

“We want to find places that will put all of the money towards research. We want to get the money we raise to the experts,” Schaetzle added.

This season, the hope is that with more people now aware of the campaign, the numbers will steadily grow.

After the week one victory over Notre Dame College, $170 had already been raised for the campaign.

Donations can be made retroactive, and any donation is greatly appreciated.