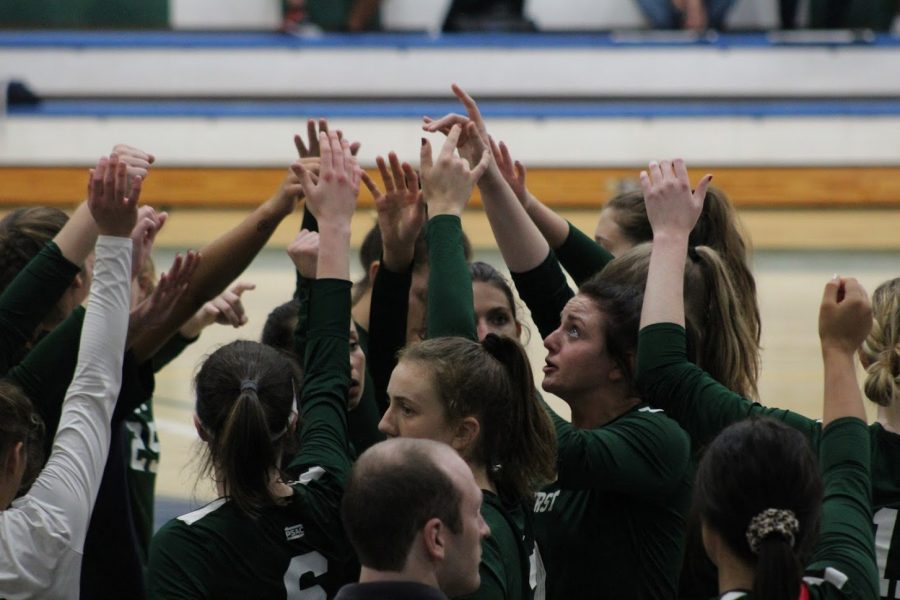 The Lakers huddle at the end of their set against Lock Haven University Saturday. With two 3-0 victories, the Lakers now have ten wins on the season.

The Mercyhurst Lakers volleyball team was victorious at their first home game versus Bloomsburg University on Sept. 26, winning the match 3-0.

The match, held at the Mercyhurst Athletic Center, consisted of set scores of 25-21, 25-14 and 25-23. In addition to being the first two home contests of the season for the Lakers, the wins were also significant for being the teams’ first Pennsylvania State Athletic Conference (PSAC) games of the season

While Bloomsburg fought back in the sets and were able to reduce the leads that the Lakers had, Mercyhurst was able to overcome with the team’s spirit and determination.

Leading the Lakers on the court was senior Tess Ganich, with a 12-kill performance. Meanwhile, seniors Alyssa Zirnheld and Kaite Baird were able to collectively get 15 kills, 12 digs and two blocks to further bolster the Lakers’ tally. Junior Hannah Vuylsteke had a pair of aces during the match, and freshman Alexa Mitchell, junior Claire Kenny and senior Mary Marusza all had double-digit assists.

Coming off of their victory, the Lakers next won against Lock Haven University in a Sept. 28 homecoming weekend contest. With a final match score of 3-0, the Lakers once again kept their opponents from picking up a game. The match consisted of set scores of 25-13, 25-9 and 25-13.

Lock Haven did not stand a chance, with sophomore Madison Kasper leading the way for Mercyhurst with ten kills, and Zirnheld with nine. Marusza and Kenny assisted the team with 11 set assists, each while Vuylsteke aided with 15 digs.

Assistant coach Jenell Patton really appreciated how the team stuck to their motto: “Culture Over Everything.”
The Lakers employ eight precepts: “Don’t Walk Past Problems, Earn the Right, Every Play Every Day, Excellence Without Arrogance, Fail Better Learn Better, Make Love a Verb, No Energy Vampires and We Before Me” in hopes of continued improvement.

The Lakers (10-3, 2-0) are set to play at East Stroudsburg University Saturday. The following day, the Lakers travel to Kutztown University for another away game. For their next home contest, the Lakers face off against West Chester University of Pennsylvania on Oct. 11.

“The season is going well. We have players making good decisions on and off the court,” Patton said. “They are buying into our team culture and seeing the results from their efforts.”