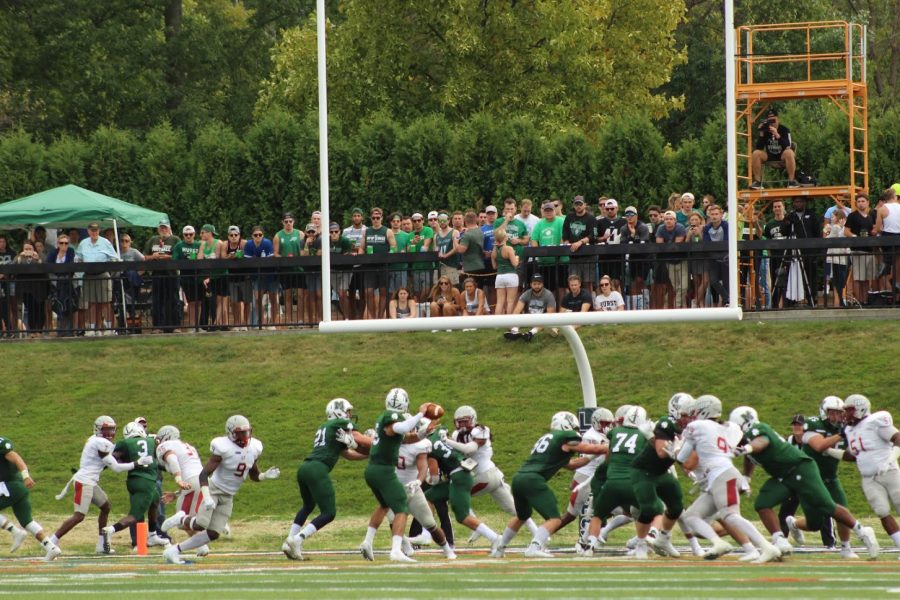 Doug Altavilla searches for a target in the end zone on Saturday’s homecoming game against Indiana University of Pennsylvania. The Lakers fell 24-56 after IUP dominated the game’s second half.

The Mercyhurst University football team had high hopes coming into its important game against Indiana University of Pennsylvania, especially since Mercyhurst was celebrating homecoming Saturday.

The Lakers knew this game was going to be tightly contested the whole way through, as IUP came into the game ranked No. 21 in the American Football Coaches Association (AFCA) DII poll.

Mercyhurst stuck with IUP, but the Crimson Hawks pulled away for a 56-24 win. The game began with IUP scoring first on a six-yard touchdown pass to put the Hawks up 7-0. Soon after, the Lakers responded, with quarterback Doug Altavilla completing an 18-yard pass to Cortez Watson. The touchdown, and the extra point that followed, tied the game 7-7.

However, IUP scored two more touchdowns making the score 21-7 and bringing misery to the Laker faithful in the stands and on top of Alumni Hill.

In an dramatic turnaround, Garrett Owens brought hope back to Laker fans when he took a 12-yard touchdown pass from Altavilla into the end zone, bringing the game to a manageable one-score difference. Closing out the first quarter, the Lakers’ kicker Mark Shafer Jr. converted on a 21-yard field goal, making the score 21-17 in favor of IUP.

In the second quarter, the Lakers showed heart and determination and took their first lead of the game when Altavilla threw an 11-yard touchdown pass to Jason Armstrong, making the score 24-21, Lakers.

But IUP would not go quietly and responded by scoring a touchdown of its own its to make the halftime score 28-24.
The second half for the Lakers was not at all pretty, as IUP took complete control and scored four more touchdowns.
These scores went unanswered, bringing the Lakers to their knees and ultimately shattering their hopes and dreams of a victory with the final score 56-24.

“I felt as if the offense executed at a high level in the first half,” Altavilla said. “As a unit, we were making plays, completing a high percentage of passes, blocking the correct guys, and running the football effectively. We were unable to put two complete halves together, which was needed to beat a team like that. I know our team is learning from our mistakes and preparing to put our best performance out there when this Saturday rolls around.”

As quarterback, Altavilla put in work, with 13 completions for 192 yards while recording three touchdowns for the Lakers’ final tally.

On defense, leading the charge were Joseph Scro, Jake Tarasovitch and Alex Zacharyasz, who each recorded eight tackles in the game.

The next game for the Lakers will be Saturday against Slippery Rock University, once again with the Lakers hosting the visitors at Saxon Stadium. Slippery Rock is currently 4-0, and is ranked No. 10 in the AFCA poll.

The Lakers are well aware, just like in the IUP game, this will be a tough one.