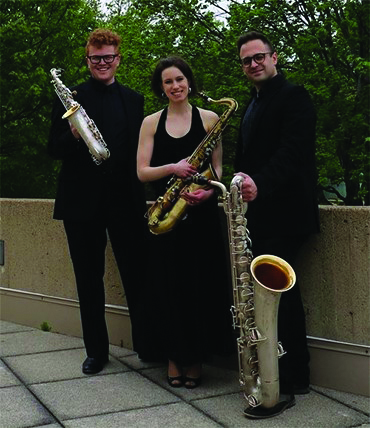 Mercyhurst University will present its second Roche Concert on Oct. 7 at 8 p.m. in the Walker Recital Hall.

As a group, the Decho Ensemble performed in concert series, on television and on the radio throughout North America and Europe.

In 2016, the Decho Ensemble was in residence with the Ny Musikks Komponistgruppe in Oslo, Norway as part of their inaugural PULS Festival.

The group has collaborated with poets, dance companies, chamber orchestras and other instrumentalists to present unique and varied programs.

Swanson received his Performer’s Certificate from the State University of New York at Fredonia, where he studied with saxophonist Wildy Zumwalt D.M.A.

He has also studied with Carina Raschèr.

Marchitelli is an active saxophonist on today’s classical music scene.

She has also performed on live radio in Cleveland, Rochester and Jamestown.

Marchitelli studied at the State University of New York at Fredonia.

In addition, Marchitelli has been part of many summer workshops and given individual instruction in the United States and Europe.

Marchitelli’s involvement in chamber music has taken her around the United States and Europe.

In 2008, she won the State University of New York at Fredonia’s Concerto Competition as a member of the Erie Saxophone Quartet.

Yackiw holds music and the saxophone in high regard.

In recent years, Yackiw has held positions such as Operation Manager for the Western New York Chamber Orchestra and a teaching assistantship at the University of Buffalo.

He has played all over the world.

It features works for soprano saxophone and electronics.

This concert will feature music for saxophone trio, including arrangements of pieces by Bach, Beethoven, Jansen, Mozart, Glaser and Moe.

The Decho Ensemble will also present a masterclass for D’Angelo Department of Music students on Oct. 8 from 12:45 to 1:45 p.m. in the Walker Recital Hall.

Both events are free and open to the public.