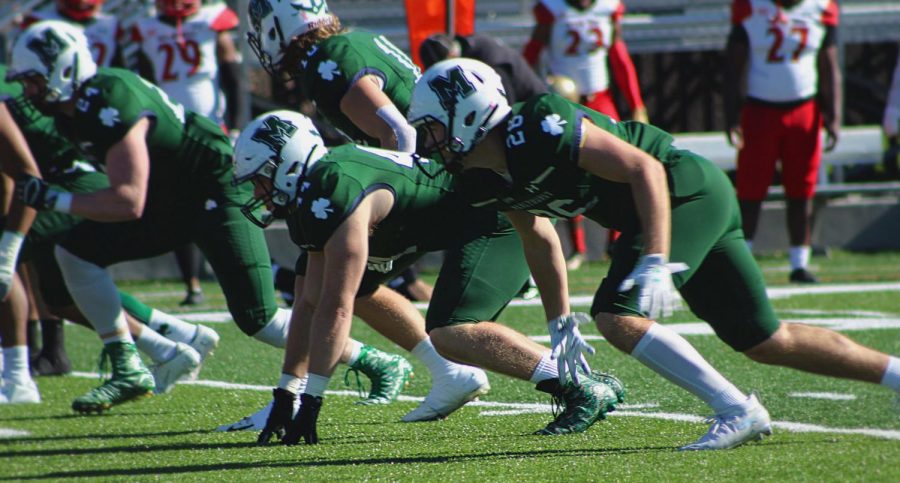 Mercyhurst wide receiver Camden Laconi, No. 28, waits at the line of scrimmage during Saturday’s game. Seton Hill overcame a Mercyhurst lead in the fourth quarter en route to a 30-20 win.

The Mercyhurst University Lakers marched onto the field on Saturday with high hopes. After a decisive and swift victory over the Edinboro Fighting Scots on Oct. 12, this week’s game featured a new challenge with the Seton Hill Griffins coming into Saxon Stadium with high hopes of their own.

Despite taking an early lead, the Lakers’ advantage faded in the second half, as Seton Hill pulled away 30-20.

On the game’s first drive, the Lakers took advantage of excellent field position to draw first blood when Garrett Owens capped off a six-play drive by plowing into the end zone, making the score 7-0 to the delight of Laker fans.

However, the Griffins answered on their first drive of the game, and with 2 minutes, 39 seconds remaining in the first, tied the score with a 22-yard touchdown pass that showed they wouldn’t go quiet heading into the second quarter.

Then something special happened not even a minute into the second quarter: Mercyhurst quarterback Doug Altavilla connected with wide receiver Clay Waldron for a 42-yard strike into the end zone making the score 13-7 with a blocked extra point. On their next drive, the Griffins marched down the field but settled for a 21-yard field goal to make the score 13-10, capping off a seven-play drive which resulted in 48 yards in the final minutes be-fore halftime.

The Lakers would drive the length of the field with another rushing touchdown by Owens to increase the lead to 20-10.Seton Hill would counter by tacking on another field goal be-fore both squads went in for half-time, with the Lakers up by seven with the score of 20-13.

The second half began with both teams battling hard for position, but Seton Hill would be the only one to make noise in the third quarter. At 9:01, the Griffins would once again settle for a field goal making the score 20-16, Lakers.

Unfortunately for Laker fans, the fourth quarter killed the optimism that marked the beginning of the game. With 4:54 remaining, the Griffins took their first lead of the game by scoring a 1-yard rushing touchdown that brought the Lakers to their knees, and went on to score another touchdown.

That was the dagger for the Lakers, as the Griffins pulled away. To add insult to injury, quarter-back Doug Altavilla was injured with on a targeting penalty by a Seton Hill defender and did not finish the game.

Head Coach Marty Schaetzle said the second half proved to be the turning point in the game.“Well, we had a chance when it was 20-16,” said Schaetzle. “I thought if we had scored we would have gotten the momentum back and even at the end we thought we were in a good situation to take the lead but we didn’t.”

Schaetzle also shared what adjustments need to be made for a big game against California University on Saturday. “Well, they’re a different offense, defense and special teams, so we have to watch films and put in a 14-hour day on Sunday and a 16-hour day Monday and get a breakdown of them.” On the heels of the close loss to Seton Hill, the Lakers (3-4, 1-3) will try to get back on track on the road when they play California University (5-2, 3-1).