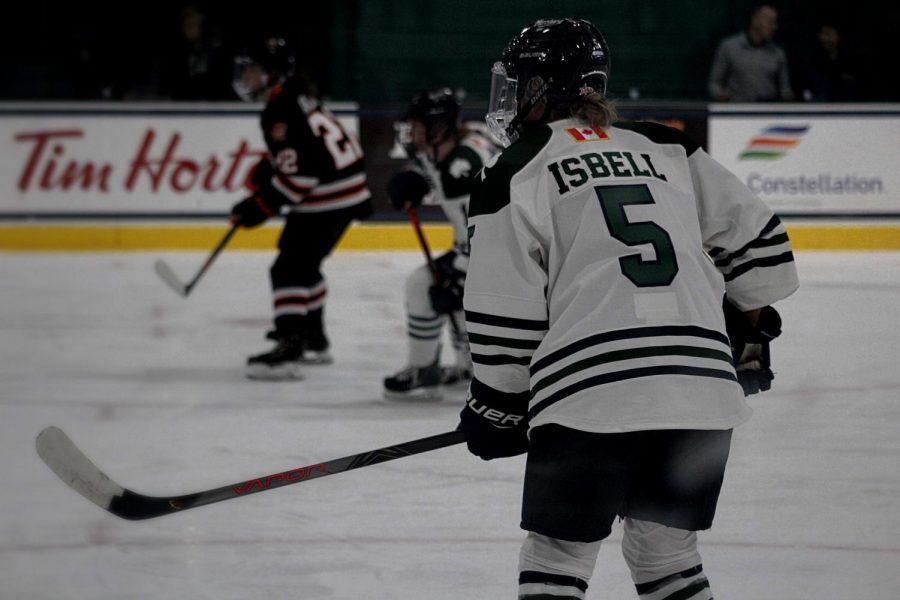 The Lakers’ Sam Isbell watches the puck during the Lakers’ game against Rochester Institute of Technol-ogy on Oct. 19. The games add two more winning tallies to the Lakers’ season.

The Mercyhurst Women’s ice hockey team welcomed the RIT Tigers on Friday, Oct. 18 to the Mercyhurst Ice Center for the first of two games.

The first period began with an aggressive start from RIT, which broke open the scoring half-way into the first period, before the Lakers got even and scored a power-play goal by forward Emma Nuutinen to tie the game 1-1 going into the second period.

The second period began with a bang when defenseman Alexandria Weiss shot the puck through an RIT defender to give the Lakers a 2-1 lead with Nuutinen and Vasko tallying the assists. At the midway point of the second period, the Lakers weren’t done. Megan Korzack scored on a one-timer set up by forwards Summer-Rae Dobson and Emily Pinto to increase the lead to 3-1.

But as the Lakers started to get comfortable with the two-goal lead, the Tigers muscled in a goal to begin the third period, cutting the lead to one. But that was the only resistance they would be able to muster that night.In the final minutes of the game, Dobson cemented victory when she scored an empty-net goal with 40 seconds remaining to give the Mercyhurst University Lakers the 4-2 victory and the first of two against the Tigers.

On Saturday, the Lakers turned it up, leaving the Tigers scoreless for the day.Nuutinen put the Lakers up in the first period, but that would be merely the start of the scoring for the Lakers. Nuutinen then kicked off the second period’s scoring, and was followed by scores from Dobson and Korzack off the power play. Vasko and Pinto would finish the Lakers’ scoring in the third period, but by then the Lakers were coasting to a 6-0 victory over the Tigers in back-to-back wins.

After dominating RIT, the Lakers will travel to Buffalo, New York, for the Icebreaker Tournament. The Lakers (4-1-1 overall, 2-0-0 CHA) will face the University of Minnesota Duluth Friday at 4:30 p.m.