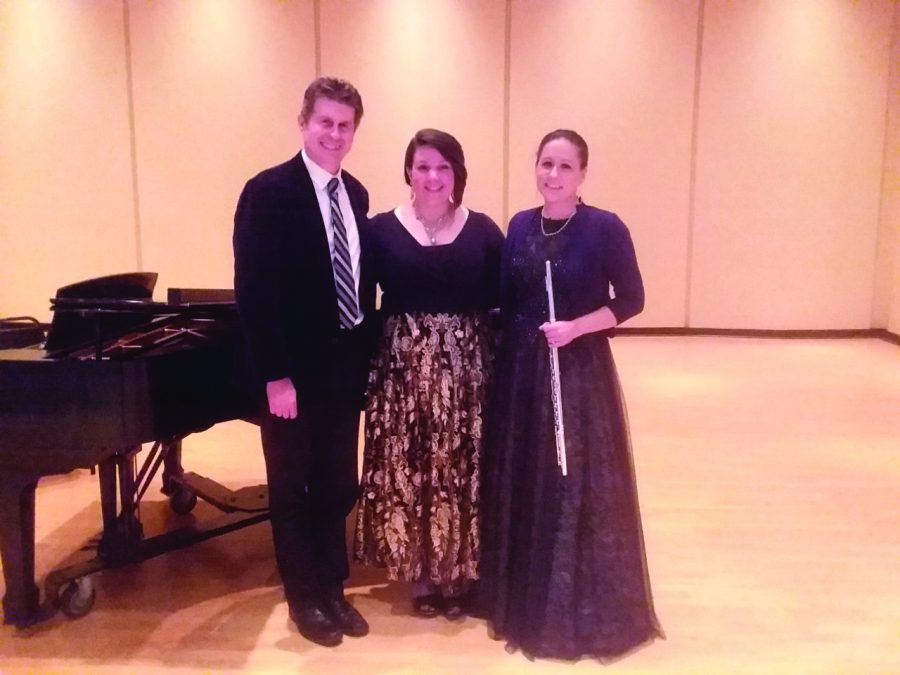 Amanda Sage is an Adjunct Professor of Flute at Mercyhurst University and a flutist performing in the Pittsburgh area.
Sage also runs a private studio and performs in various ensembles in the Pittsburgh area.
Her performance was both spirited and very technically impressive, a combination that shone in the repertoire of the recital.
Sage is a scholar and advocate of early music and historical performance, also reflected in her chosen repertoire.
Sage was
Her pieces ranged from as early as Telemann in 1739 to as late as Prokofiev in 1942.
Her first piece was Sonata in G major, written by George Philipp Telemann from his “Essercizii Musici,” a collection of solo and trio sonatas.
The collection was actually written so that it could apply to a variety of instruments common at the time of composition, including recorder, oboe, violin, and harpsichord.
The sonata was beautiful, the four movements (“Cantabile,” “Allegro,” “Affettuoso” and “Allegro”) all containing artful leaps and runs, with several sequences.
The most thoughtful movement was easily “Affettuoso,” more somber than the others yet lilting, with emotional lines that mimicked voices.
The next piece was Rondo in D major by Wolfgang Amadeus Mozart, which has cloudy origins but is nearly identical to his Rondo in C major for violin and orchestra.
Mozart is one of the most well-known and influential composers of all time, and the reason is evident in this piece.
It uses interesting chromatic scales and soaring melody lines that are closely woven with the piano part.
My two personal favorite pieces played were Albert Franz Doppler’s “Hungarian Pastorale Fantasie” and Giacomo Puccini’s “Vissi d’arte” from his opera “Tosca.”
“Hungarian Pastorale Fantasie” was whimsical and dramatic, and somehow almost tangible.
It is an example of musical exoticism, written with a flavor of traditional Hungarian folk music.
For the excerpt from “Tosca,” soprano and Merychurst alumna Nicole Tafe (‘07) was featured.
Tafe graduated from Mercyhurst with a degree in Music Education and went on to get her Master’s Degree in Vocal Performance from Carnegie Mellon University.
Tafe’s voice was a full, rich soprano with almost satiny vibrato.
The most recently composed piece in the recital, Sergei Prokofiev’s Sonata for Flute and Piano in D major, op. 94, was written during World War II.
His mid-century Russian style is unmistakable, and the context of wartime in Russia is evident in the piece.
Each movement was vastly different from the last; “Moderato” was characterized by large intervals skillfully surmounted by Sage’s technical ability, “Scherzo” was urgent with a wide tonal range, “Andante” was tender and sweet and “Allegro con brio” had gorgeous runs that hung onto the high notes.
For the finale, Tafe returned to the stage with Sage and Hess to perform Ary van Leeuwen’s flute arrangement of Leo Delibes’ “Le Rossignol,” or “the nightingale.”
The piece is a conversation between the soprano and the flutist, with the flutist playing the role of the nightingale.
The text is based on an old poem which urges the listener to hear the nightingale’s song and to take caution because although the flowers return each spring, love comes only once, never to return.
The call and response between flute and soprano was thoughtful and artful; each note was written for a reason.
Tafe’s performance in this piece was especially impressive as she matched pitch with the flute while it climbed ever higher.
Sage’s recital was filled with beautiful, unique pieces that each showcased her expansive talents.
The addition of a vocalist was a nice touch, especially an accomplished Mercyhurst alumna like Tafe.
The next recital of one of our exceptionally talented faculty members is on Nov. 16, featuring clarinettist Rebecca Wunch.