They ‘dech’ed the recital hall 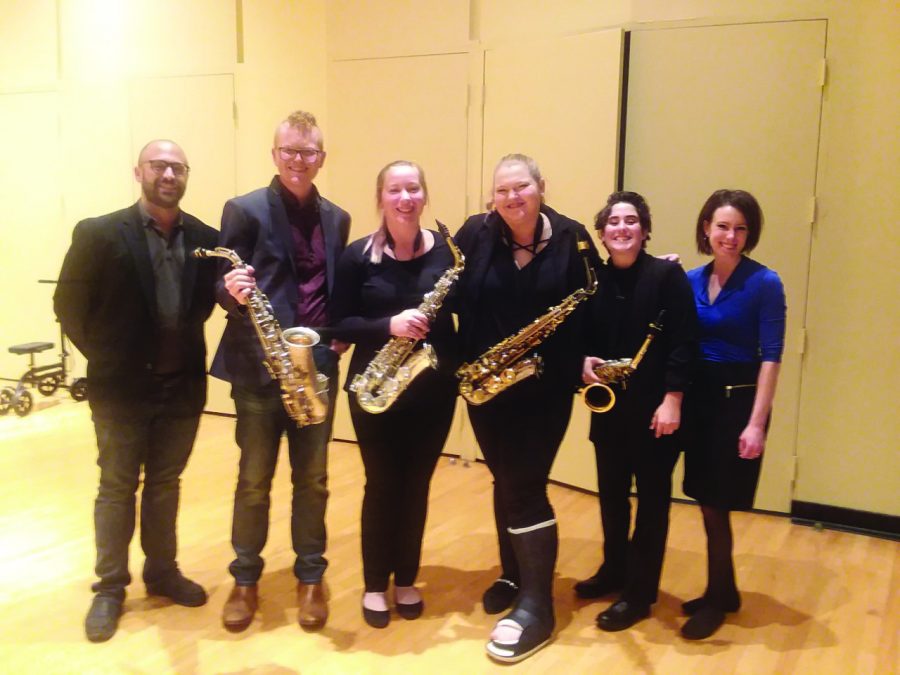 On Oct. 7, the Decho Ensemble gave a concert in the Walker Recital Hall, and on Oct. 8 they gave a masterclass to Mercyhurst senior saxophonists.
The Decho Ensemble is a saxophone trio out of western New York comprised of Jacob Swanson on the alto saxophone, Sarah Marchitelli on the tenor saxophone and Jared Yackiw on the baritone saxophone.
The repertoire for this concert had an immense range, from old pieces that had been arranged for saxophone to very contemporary songs.
The recital began with a selection of three fugues by Johann Sebastian Bach that had been adapted for saxophone trio.
Each was adapted from Bach’s massively famous collection “Das Wohltemperierte Klavier” or “The Well-Tempered Clavier.”
Each fugue showcased the group’s precision.
Two of the pieces were quick with rapid motion and one of them had slower, gorgeous fluid lines.
The next piece was “Trio, Op. 87” by Ludwig van Beethoven.
Its high opus number is misleading, and the piece was actually written before his Opus 1.
Originally composed for two oboes and English horn, it was intended for the ever-increasing number of amateur musicians in Vienna.
The piece was very conversational, and the connection between the members of the ensemble was evident in the excellence of the performance.
For their first contemporary piece of the evening, the Decho Ensemble performed John C. L. Jansen’s “Fields of Jade.”
It was composed in 2014 for two baritone saxophones and percussion, and another version was published later for two electric guitars and percussion.
The work was arranged for the Decho Ensemble in 2019 and was incredibly interesting.
It began with layering of the parts, and it felt urgent and dark.
Extended technique was employed to make the saxophone sound like an electric guitar by the use of vocal distortion.
This piece in particular demonstrated the talent of the ensemble and their command of embouchure.
After it had concluded, the group bounced back to the Classical Period with “Divertimento No. 4” by Wolfgang Amadeus Mozart.
The five movements of this piece couldn’t be more different from each other, with a pastoral Larghetto section, a light and mysterious Adagio section and a cheerful Allegretto section.
The most interesting piece of the night was Trio for Saxophones by Werner Wolf Glaser.
Glaser was a German composer displaced during World War II due to his Jewish ancestry.
He ended up settling in Sweden, where he would make his career.
This piece was incredibly difficult for the Decho Ensemble to get their hands on.
It was not stored in any libraries or archives in the United States.
The ensemble reached out to the publishing company that held Glaser’s other pieces, but they had only recently acquired the account and did not know of any surviving copies of the trio.
By a stroke of luck, the composer’s son showed up as a friend suggestion on Facebook.
He had a copy of the piece which he mailed to the Decho Ensemble, and they have been performing it since.
The piece is characterized by a variety of textures, a high range, and beautiful themes.
The final piece of the night was “Rough Winds Do Shake the Darling Buds” by Eric Moe, which was composed in 1999.
This piece has a contemporary sound, and the program notes described it as “edgy and lyrical, gritty and elegiac.”
It represents the nitty gritty of classical style music of the modern era.
Inspiration for this piece was drawn from Debussy, Jimi Hendrix, Bud Powell and jazz fusion.
It was rhythmic and exciting, with clear tones of progressive rock.
The Decho Ensemble displayed for Mercyhurst the true flexibility of the saxophone as a concert instrument.
Their blend was absolutely impeccable, and every note was spot on.
This group could be recommended to anybody.