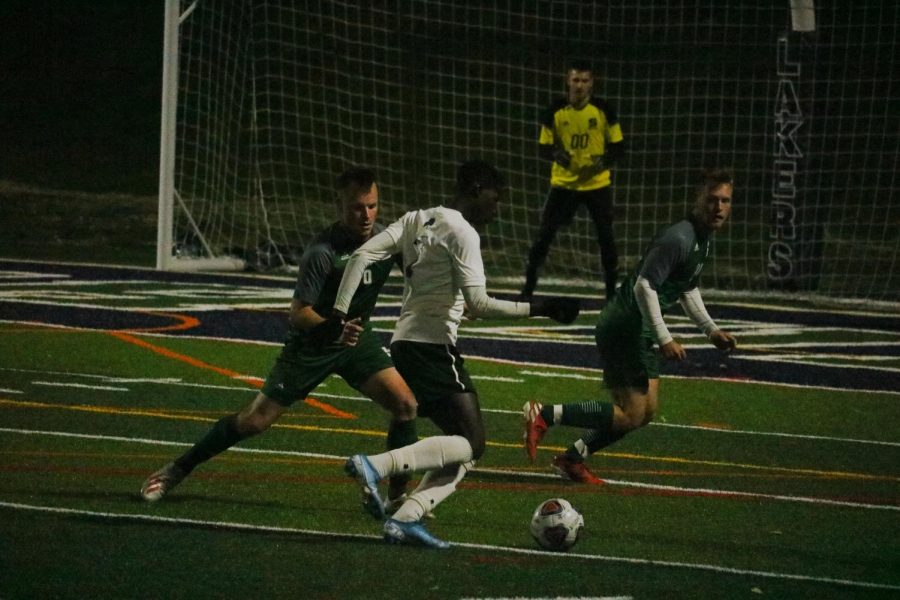 Mercyhurst University’s Men’s soccer defeated Slippery Rock University on Nov. 2 in a 1-0 victory, giving them an in-conference record of 5-2-1 (8-4-2 overall). The Lakers are currently situated in second place in the Western Division of the Pennsylvania State Athletic Conference (PSAC), giving them one of the three slots in the conference playoffs. This is the first year that this group of players has played in a split East/West PSAC conference. The top three teams on either side of the PSAC progress to the playoffs this month.

The Men’s program, coached by Nenad Vidakovic, Austin Solomon, George Stannard and Andrew Bennett, will graduate 16 seniors this year – many of whom are four-year veterans to the program. Senior captain, Connor Wilkinson, is one such player, beginning his career in 2016, when the team won the PSAC conference title. In a pre-match interview, Wilkinson reflected on his decorated time with this program. “My favorite memory is easily winning [the conference title] freshman year. The culture around our team, the players and talent we had was amazing. It was an unbelievable feeling,” Wilkinson said.

A strong performance was put on by the senior class during the game. Key performances came from Wilkinson and fellow senior, Hady Sarr with two and three shots on goal, respectively. Senior goalie Martin Jarc secured his fourth shut-out of the season, saving Slippery Rock’s one and only shot on goal. The 1-0 victory marks a swift turnaround for the Lakers, who lost 0-1 to Slippery Rock when they last met on the road on Oct. 23. Senior defender and midfielder, Mats Rohrken secured the only goal of the game off of a corner kick taken by sophomore Henri Tophoven in the 86th minute of the game.

Assistant Coach Andrew Bennett commented after the game that Rohrken put on a massive performance for the team. “He played with calmness at the back, was strong in possession and broke through the opponent’s line to connect with our offense. His goal topped off an already great performance,” Bennett said.

Senior midfielder and forward Salvatore Canzoneri, who is currently injured, shared his thoughts on the game afterwards as well.“We let them come to us for the first 15 minutes of the game and didn’t pressure very much, we just waited to see how they were playing,” Canzoneri said. “We played really well, just couldn’t finish opportunities at the beginning. Finally, with 4 minutes left in the game we scored.” He later added that the Lakers, although unlucky at first, controlled possession and played a strong game.

The Lakers will take the field again on Nov. 6 at Saxon Stadium, with a 7:30 p.m. kickoff as they play cross-town rival Gannon University for their “derby day.”A critical match for the Lakers, the game will work towards building momentum leading up to the conference tournament later this month. On their most recent encounter, the Lakers fell 2-0 to the Golden Knights when they played on Oct. 19.

A victory for the Lakers in their upcoming game would make quite a statement to the Golden Knights (14-1, 7-1), who are currently ranked first in the PSAC West. After Gannon, there is one more game on the Lakers’ schedule (at California University on Nov. 9) before the regular season concludes, after which, the Lakers hope to make a postseason run.