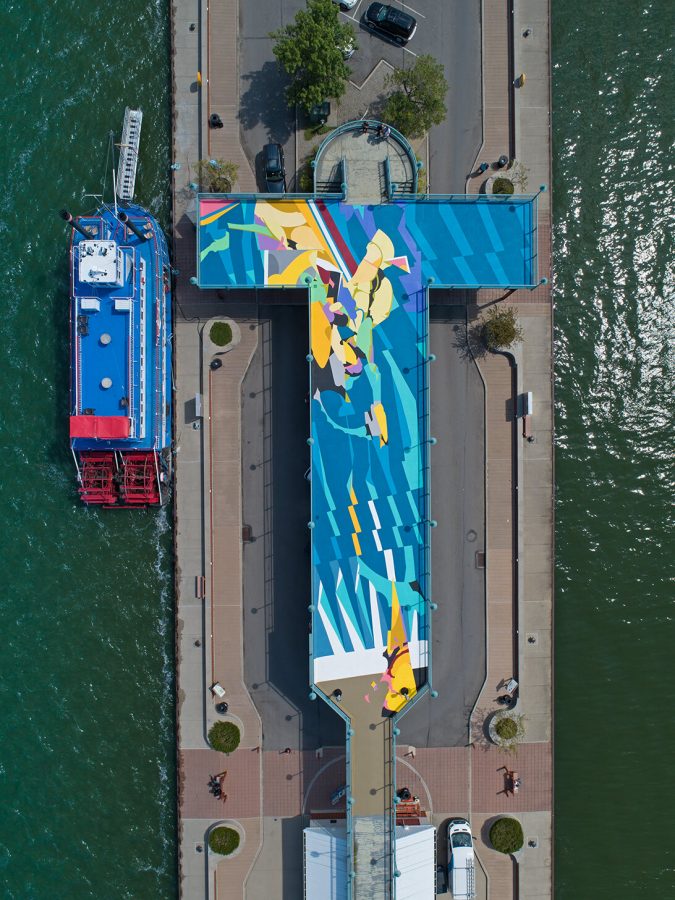 Erie recently saw several new murals and mural projects set up thanks to Erie Arts & Culture, its sponsors and the different artists it asked to provide assistance.

Mural artists, in general, are on the rise in the Erie community as a way to “reinforce the positive emotions between people and place,” according to August report released by Erie Arts & Culture. The Erie Port Authority was looking for a way to increase public interest and traffic for the Bicentennial Tower. So they teamed up with Erie Arts & Culture and street art curator, Iryna Kanishcheva, to set up the first major outdoor art exhibit for this year with the painting of the observation deck leading up to the Bicentennial Tower, the report said.

The artist that they selected for the project was Venezuelan artist SatOne, who currently re-sides in Germany. SatOne’s past projects include colorful, abstract murals from all around the world including Austria, Australia, Brazil, Canada, France, Ger-many, India, Italy and Norway, which contributed to Erie and Port Authority choosing him for the observation deck.

Joined by Kanishcheva and Erie-based artist Caesar White-brook, SatOne completed the project in a mere six days. The mural is named “Flotsam,” referring to ship wreckage or debris that may wash ashore.

“This is why he finds the definition of flotsam so intriguing, people or items that have been rejected or regarded as worth-less,” SatOne’s artist statement in the Erie Arts & Culture re-port said. “As people, he thinks all of us, at one point in our lives, experience a momentary sensation of feeling cast aside and unvalued.”

Zedz is the lead artist working to transform the Zaphiris Family Limited Partnership building on W 12th Street. Zedz got his start painting graffiti in the Netherlands in the 1980s and this will be his first project in America. According to a September Erie Arts & Culture report, his work “merges his interest in architecture, design and street art.”

The mural on the Zaphiris Building also has a special connection to one of the faculty members at Mercyhurst.

“I love the murals and public art in Erie,” Organizational Leadership program director, Anne Zaphiris, Ph.D., said. “This project is really cool because the former General Tire building was the first building my dad, William Zaphiris, designed as an architect and the building was recently purchased by my brother, Pete Zaphiris.”

This project is also meant to help bolster the artistic work of Wallace and Pastore.

Wallace is a multi-disciplined artist who has worked as a dance instructor, employment specialist at the Barber National Institute and a manager of King’s Rook, a live music’s venue. Pastore is also multi-disciplined, having recently opened up a print and paper-making studio. Both of them have aspirations for future art projects once they finish the project with Erie Arts & Culture.

SatOne and Zedz aren’t the only artists to have contributed. Elio Mercado, an internationally known artist from the Dominican Republic, created a mural of Erie resident Rudolph “Rudy” Daniels on Erie’s Methodist Towers. Mercado was inspired by Daniels’ story and bright smile as he chose him as the subject of the mural.

An Oct. 18 GoErie.com article states that Daniels was originally from Philadelphia, and has lived in Erie since 1995, having spent the last six years in Methodist Towers with his brother. According to the article, Daniels’ story of how he was involved in gang activity in Philadelphia when he was 10 or 11 years old, and even suffered stab wounds three times. During a fight with a rival gang, pellets from a sawed-off shotgun blinded him and put him in a coma for four days. Adjusting to his blindness was difficult. He suffered strained relations with his family, heavy drinking, and three attempts at suicide.

After his last attempt, Daniels prayed to God and said that it “brought him back.” Keeping himself clean, he found work in Philadelphia for the next three decades, eventually finding work at other companies and living at peace in Erie.

Daniels told GoErie.com he enjoys his current life and is glad to be the subject of the mural.

Mercyhurst faculty have taken notice of the positive impact that the murals have had on the community as well.

“The recent increase in murals in the Erie area is a positive omen that the city and region are making a comeback. These murals often add to a building’s character and make a neighborhood happier and more colorful,” assistant professor of art and program director of studio art Gary Cardot, M.A., MFA, said.

Photo originally published on ErieArtsandCulture.org. This overhead shot taken by @lake_effect_aerial showcases the colorful and abstract nature of SatOne’s “Flotsam” mural on the second level of the Bicentennial Tower along Erie’s Bayfront.