They played a ‘Wunch’ of great pieces 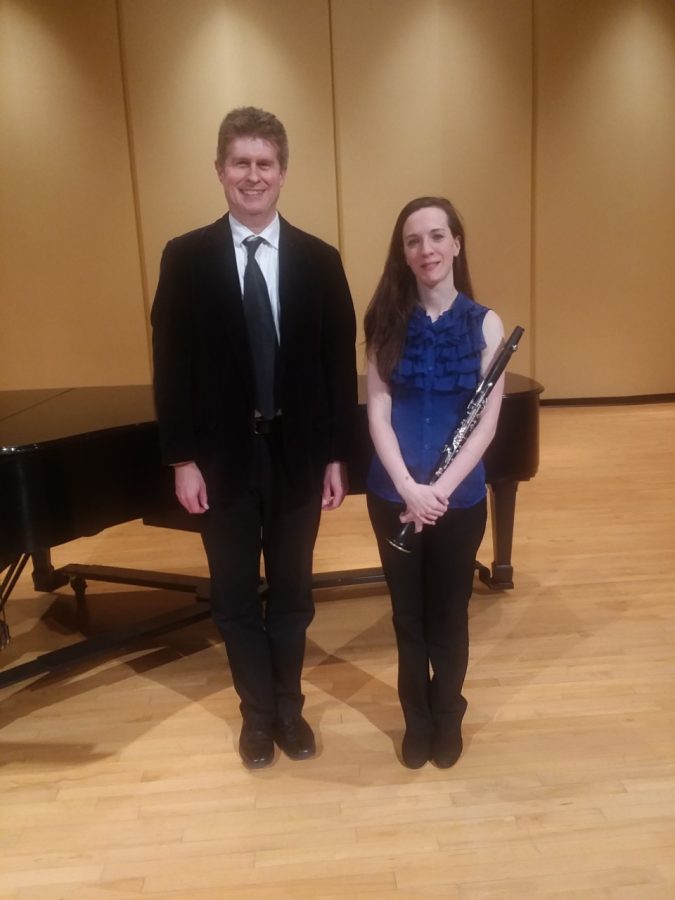 Rebecca Wunch, clarinet, and Nathan Hess, DMA, piano, closed out the Faculty Recital Series for the fall semester on Nov. 6.

The program included pieces that varied in period and character.

The duo alternated performing solo works, and they played two pieces together.

The concert began with a Nocturne for piano by Ottorino Respighi, an Italian composer known best for his orchestral compositions.

Though it was composed a few years after the end of the Romantic period, it still retained several qualities of a Romantic piece.

It began slow, as nocturnes do, with sparkling bits in the middle that sounded like stars.

The dark, sustained chords in the accompaniment conjured images of a lake surrounded by trees and glittering moonlight.

The piece had a very clear Chopin influence, creating distinct images and emotions.

The next piece, a solo performed by Wunch, was called Fantasy for Clarinet, op. 87 by Malcolm Arnold.

Having been composed in 1966, it was one of the more contemporary repertoire pieces.

This Fantasy was composed to be a test piece for a competition, presenting many challenges to the player.

Wunch, however, played the piece easily, demonstrating expert navigation of tone and dynamics with a full sound and beautiful intonation.

She seemed unphased by the rapid leaps to and from the high and low registers, artfully exploring the depth of the details of the piece.

Hess returned with a Frederic Chopin set, including two of his mazurkas and one of his preludes.

The mazurkas are influenced by Chopin’s native Poland and are short dances of varying tempos.

It seemed to have many abrupt changes in tone, which Hess maneuvered with grace and emotion.

This one was faster than the first, brighter and pastoral.

The third piece of the trio was Prelude in C-sharp minor, Op. 45.

The prelude started with a gentle elegance with thought put into each beat by Hess.

It modulated several times and featured a beautiful cadenza at the end that spanned the length of the keyboard.

They were written as lesson pieces for students, and as such feature complex time signatures and tricky changes in mood and rhythmic intention.

The first movement was quick, with a dance-like quality.

The second movement was slower and more fluid.

The third movement was dissonant, with a chaotic melody in the clarinet and a bouncing accompaniment in the piano.

The fourth movement slowed down with a staccato piano part.

The clarinet was smooth on top, highlighting Wunch’s virtuosic command of the instrument.

The fifth movement repeated the original theme in a passionate, fiery dance.Hess next performed a series of excerpts from Robert Schumann’s Waldszenen, Op. 82 as his final solo.

The name of the piece translates to “Forest Scenes,” and the three movements he performed translate to “Entrance,” “Bird as Prophet” and “Farewell.”

The forest inspiration was very evident and conjured such images as sunlight pouring through a lush canopy, bird calls, gentle breezes, babbling brooks and deer feeding in the brush.

The second movement had a hymn-like B section and ended with an irregular cadence.

The final movement was very visceral, and listeners could feel themselves emerging from the woods with Hess as their guide.

The beginning of the piece was laced with drama and launched into a theme and variations.

The variations were complex, and the piano could be heard set-ting up the tone for the next variation for the clarinet.

The piece ended with an intense conversation between the two, a perfect conclusion to the concert at large.

If you missed this last installment in the Faculty Recital Series for the fall semester, fear not, there are several student performances to take you into the New Year!