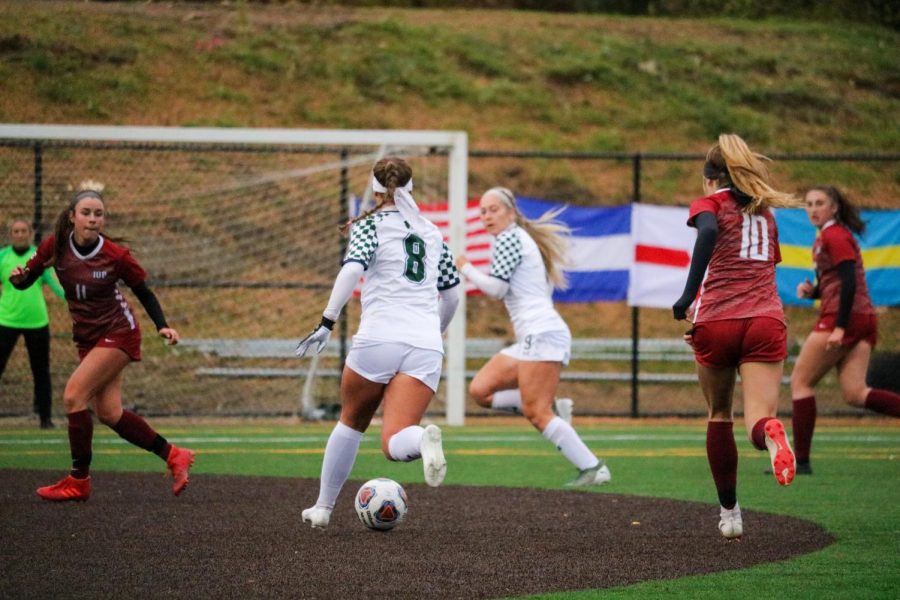 The Lakers ended the season with an unfortunate 2-1 loss to Edinboro University on Nov. 12, finishing the season in PSAC quarterfinals. The Lakers clinched a PSAC Tournament opportunity with the win against IUP on Nov. 6 and then dominated over the California Vulcans to reach the PSAC playoffs for the first time since 2013.

The women played on their home field, beating a scoreless IUP 5-0. The Lakers showed no mercy to the Crimson Hawks, with a goal from senior Maya Bauer just four minutes in, followed by another from freshman Alyssa Otto, again in the game’s fourth minute. Freshman Cristy Senskey scored the third Laker goal 28 minutes in, while Bauer tallied two more assists.

30 minutes in, Bauer passed the ball to Otto, who tapped it into the back of the net, making the halftime score 4-0, Lakers. After a quieter start to the second half, Otto scored her final goal at 60:44, recording a hat trick for the day. “I don’t know what it was but I woke up that day and I felt good, and I felt like we could win. I knew going into the game it was more than likely the last time our senior class would play at home. That really gave me more motivation on the day and I played my absolute hardest and I was exhausted, but it felt good to be able to contribute to the team and play as best as I could,” Bauer said.

On defense, goalkeeper Vilde Wold made three saves and earned her 10th shutout of the season. Mercyhurst held an 8-3 shots on goal advantage and 4-2 edge in corner kicks. “I think we played an awesome game together and it was a real team effort with three different goal scorers,” Bauer said. “All the girls that came off the bench did a great job and played so hard, and I felt like we had a collective understanding of one another on the day. So many of us got to contribute to that win, and my gosh, it was some game.”

Head Coach Jon Arlet shared a similar sentiment, saying “I thought it was a great team win. All goals were of high quality and were followed by a very energetic work rate, so for the coaching staff we are proud of this result for the players and very much so appreciate their investment on the day.”

Just three days later, the team traveled to California, PA to take on the Vulcans in a game that resulted in a 4-1 win for the Lakers.

California got on the board first with a goal from Juliana Cruz only 41 seconds into the game. This was the lone goal of the match for the Vulcans.

It was followed by four unanswered shots on target by the Lakers to end the regular season with their fifth consecutive win. Otto scored first at 26:50, followed by freshman Amber Thomas, who netted her first goal of the season as she hit the top left corner from 20 yards out.

This gave Mercyhurst the 2-1. During the second half, freshman Cristy Senskey scored an insurance goal for the Lakers (with an assist from senior Emilie Bock), and seven minutes later, Thomas scored her second goal of the game to extend the Laker lead to 4-1. Wold made three saves for the Lakers.

In total, the Lakers held a 13-4 shots on goal advantage for the game and 3-0 edge in corner kicks. The decisive win over the Vulcans, combined with their overall season performance took the Lakers past the regular season and into the PSAC playoffs for the first time since 2013.

“In the two victories this week, we played well the entire game without letting up. We worked hard and most importantly, worked as a team. We are going into playoffs with a five-game winning streak. Our momentum is up and we are playing our best soccer,” Otto said. “We are looking to build on recent performances and continue to be disciplined and organized while creating dynamic attacks leading to goal ahead of post season play,” Arlet said.

The Lakers headed to Edinboro University for the first round of the PSAC Tournament on Nov. 12, where they had their first loss in six games. Despite Mercyhurst controlling the game in the first half, Edinboro scored twice in less than two minutes in the second half taking a 2-1 lead.

Even with the disappointing result, the Lakers finished with a very solid season.