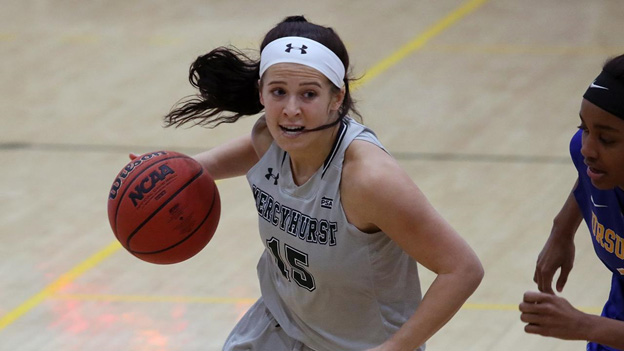 Despite going into the game unbeaten, Shepherd lost to the Lakers, 84-80. This game represented Mercyhurst’s first Pennsylvania State Athletic Conference (PSAC) contest with Shephard since the Rams joined the conference for the 2019-20 season.

Mercyhurst was up very quickly in the game with field goals by Emily Shopene, Lauren Lapertosa and Amber Renz. Shepherd came back, but the Lakers countered with shots from Vivian Allison, as it continued to be a very close game. After the first quarter, the score was tied at 20. A frantic second quarter saw Shepherd take a 47-41 lead.

In the second half, the Lakers fought back with baskets by Nicolete Newman, Allison and Renz. Shepherd refused to go away, however, and it took a 53-50 advantage. But Mercyhurst’s Eliza Oswalt scored and tied things up at 57-57.

By the end of the third, Shopene scored a layup at the buzzer on a pass from Renz, and the Lakers took a one-point lead with a score of 62-61.

Moving into the fourth and final quarter, Meghan Komendarek helped the Lakers’ cause by making four free throws. With the help of Shopene, Renz and Newman, Mercyhurst held a 77-70 lead and finished strong to hold on for the conference win.

During the game, Mercyhurst shot 47.5 percent from the floor. Shopene led the Lakers with 16 points, Renz had 13, Lapertosa added 12 and Allison chipped in 11.

Over Thanksgiving break, the Lakers also took on Ursuline College on Nov. 27 at the Mercyhurst Athletic Center. The game saw several lead changes, and Mercyhurst rallied in the second half, but Ursuline eventually pulled ahead for a 68-63 win.

The game had a slow start, but Lapertosa and Renz staked the Lakers to an early 4-2 lead. But the first quarter ended with a score of 16-15 with the Ursuline Arrows ahead. The Lakers were ahead in the second quarter, 23-20, after Renz and Allison made shots. The second-quarter score of 30-27 went to Ursuline despite Mercyhurst’s Komendarek and Newman scoring four points each.The two teams continued to fight for positioning in the second half, but Ursuline pushed the lead to 45-31.

However, the Lakers scored eight of the last 12 points in the third quarter, with the help of Jenna Kunst, Stephanie Petery and Oswalt. In the fourth and final quarter, the Ursuline lead was cut down to 65-57 thanks in part to Lapertosa, Newman, Shopene and Renz.

With 89 seconds left, Ursulin held a 66-63 lead. Mercyhurst went scoreless for the balance of the game, as Ursuline increased its cushion. The Lakers went 40.6 percent from the floor, and Newman was able to score 14 points while also gaining three assists and two steals. Renz helped with 12 points, Lapertosa with eight, and seven points were scored by both Shopene and Petery.

Coach Brooklyn Kohlheim remained optimistic about her first year coaching at Mercyhurst. “My first year has been great so far,” she said.

“The hospitality across campus and within the community is awesome. This is a really good group of players that are really fun to coach.”

She also discussed the goals for this year, which include making the PSAC tournament while focusing on coming together as a team. As for how the team played, Kohlheim said she was proud of the Lakers’ abilities. She described it as “a group effort.”

“Our bench was incredible and our energy and effort carried over from possession to possession,” she said.

She also praised the leadership from the team. Looking forward on ways to improve, Kohlheim specifically mentioned improving defense and communication.To make it to the PSAC tournament, Kolheim said the team must have its “eyes on the top of the conference – Cal, IUP and Edinboro.”

“You have to watch everyone and come ready to play every single game so I really try hard to not focus on anything but the immediate game before us,” Kohlheim said.

With these last two games under their belts, the Lakers are currently 2-5 overall and 2-0 in PSAC.

The Lakers will return to the court on Saturday, Dec. 7, when they play against the West Chester University Golden Rams on the road.