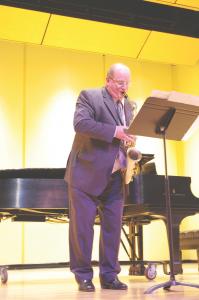 Zachary Dorsch: Allen Zurcher is an active member of the Erie jazz community.The audience couldn’t get enough of local musician Allen Zucher, Ph.D., who received a standing ovation after his recital Thursday night as part of the Faculty Recital Series

The house was packed, and judging from the audience’s facial expressions, everybody was astonished at the sound emanating from the stage.

The program included works in the classical style, jazz works and improvisations by the performers.

Such a mastery of the saxophone was displayed that seemed to keep all in a trance, with their eyes fixed on the stage.

Zurcher initially got his degree in saxophone performance from Edinboro University.

After, he attended grad school at Youngstown State University for saxophone performance.

He then got his degrees in jazz pedagogy and saxophone performance and pedagogy from the University of Northern Colorado.

Zurcher is an extremely successful professional saxophonist and can be seen performing all around the city of Erie.

Some of his most recent venues have been The Erie Art Museum and entertainment for the Jazz and Blues walk.
Joining the talents of Zurcher were two friends and accomplished musicians.

Tony Grey, on the electric bass guitar, presented just as much showmanship and talent as Zurcher. Matt Ferguson, on drums, also added a very steady beat.

Together, the trio performed everything from modern work to a section of the program in which they performed an original improvisation.

The trio’s improvisation piece sounded anything but spontaneous.

These three musicians performed the piece (without prior rehearsal) so perfectly in sync that it could have easily passed for a musical number that had been rehearsed for months.

One thing that is apparent is that the standards for the rest of the faculty recital series have definitely been bumped up a notch.