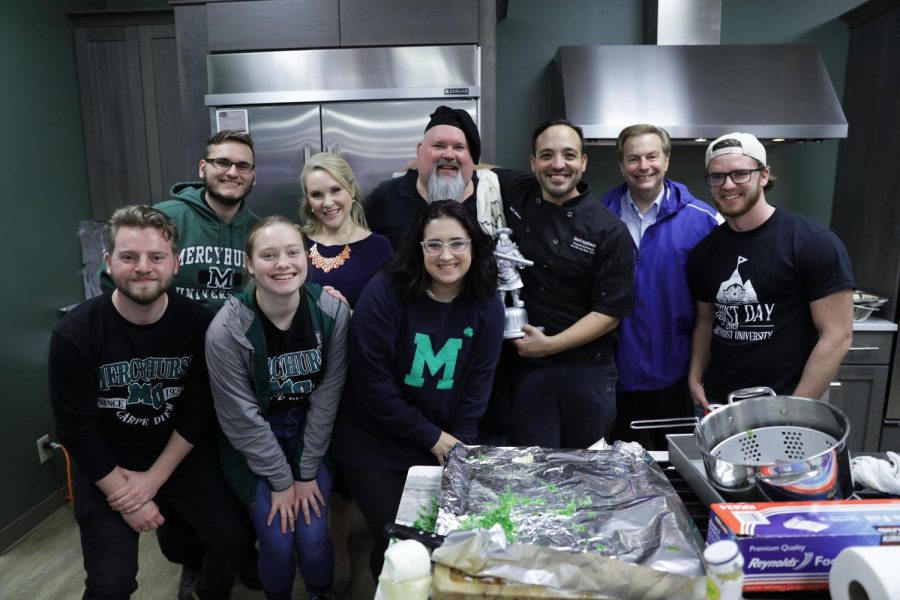 Peter Zohos, MBA, assistant professor and chair of the Hospitality Management Department, said students were proud to be a part of the event.

“This event was an overall success and we are grateful for the opportunity,” Zohos said. “We will definitely want to take place in this again in the future.”

Senior Hospitality Management majors Marie Bergquist, Christian Kendel, Nick Ragosta and Zachary Farsace represented Mercyhurst as judges of the challenge. All four students said they were excited to take part in the event and called it an unforgettable event.According to Zohos, each student was selected because they all demonstrate a passion for the culinary arts and “are fluent in the language of food.” Most of the students involved were Food and Beverage concentrations within the major.

The hit Food Network show “Chopped” is a reality-based cooking television game show series hosted by Ted Allen. The series puts four chefs against each other as they compete for the chance to win $10,000 dollars. Similarly in Erie News Now’s version, two teams of news anchors — “The Night Team” and the “Morning Team” — compete against each other in a dinner challenge. Evening anchors Mike Ruzzi and Amanda Post took on morning anchors Mark Soliday and Kara Coleman. Both teams were assisted by professional chefs.

The teams had one hour to prepare a meal that included the secret ingredients of chicken wings and pierogies. The Mercyhurst students served as judges for the event.

“This experience helped me to appreciate the field I’m going into and it was a blast getting to be a part of this experience,” Kendel said. “I am incredibly grateful for the Hospitality Department.”

The student participants stated that there was an energy like no other during the competition.

“It was unreal getting to work in a professional setting,” Ragosta said. “That was definitely my favorite part of the experience.”

Students and members of the department said they were incredibly thankful for this opportunity and look forward to the future in hopes that they will get to partake in this experience again.

Farsace said Mercyhurst’s participation in this event with Erie News Now helps to promote the hands-on learning experience that the Hospitality Department can offer its students.

“It was great getting to con-tribute something unique,” he said. “It’s great getting to have a real hands-on experience that could ever exceed the excellence of all of the great aspects offered in Mercyhurst’s Hospitality Department.”