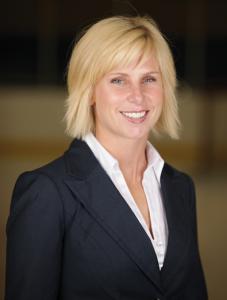 Sports Information photo: New Assistant Coach Delaney Collins brings 11 years of Canadian National Team experience to the bench. Hopefully the addition of Collins will help the learning curve on a team welcoming nine new players.The newest recruit of the women’s hockey team this year is Assistant Coach Delaney Collins.
Collins played on Canada’s National Women’s team since 1999 but felt that it was time to retire.

“I felt that I was done playing hockey. I had some post-concussion symptoms in the 2008-09 season, and I didn’t want to take any more health risks,” Collins said.

After retiring, Collins took some time for herself and then decided to apply for the position at Mercyhurst College.

“There aren’t very many programs that I would have said yes to,” said Collins. “I did turn down some other jobs to come here. It is Mercyhurst’s tradition combined with their commitment to excellence that made it a no brainier for me to apply for the job.”

Collins is an impressive athlete, which will benefit the women’s hockey team. She has played in five International Ice Hockey Federation (IIHF) championships, appeared in six 3 Nations/4 Nations Cups and was invited to the Canadian National Women’s Team selection camp this past March to select the final roster for the 2011 IIHF Women’s World Championships.She said that hockey has given her many life lessons over the years.

“It taught me to handle all situations. When faced with diversity or having an excess amount of success, you always have to be humble, work hard and stay positive and when no one else is willing to,” Collins said.

Collins has been playing hockey since she was four years old.

“My parents gave me the choice of playing hockey or figure skating. I chose hockey because my brothers and dad all played,” she said.

“I am always inspired by the people who say I can’t do something and the people who doubt,” said Collins. “At 5 feet 3 inches and 130 pounds, I had to prove myself every day when I played on the national team—there were a lot of people who didn’t think it was possible.”

Collins is excited at the opportunity of coaching the women’s team at Mercyhurst.

“I am really honored and excited to be here. It’s an honor to be a part of this program that Coach Sisti has built from scratch,” Collins said.

Collins isn’t the only one who is excited—her players are, too.

Sophomore Christie Cicero said, “She seems extremely knowledgeable about hockey. I’m for sure looking forward to what she’ll bring to the team.”

“We’re really excited about it. She’s a great coach—she holds high expectations for us and herself. I’m excited to see what she’ll bring to the team and how she’ll develop us as players,” junior Lauren Jones added.

Their next game is Saturday, Sept. 24, at 4 p.m. at the Mercyhurst College Ice Center.