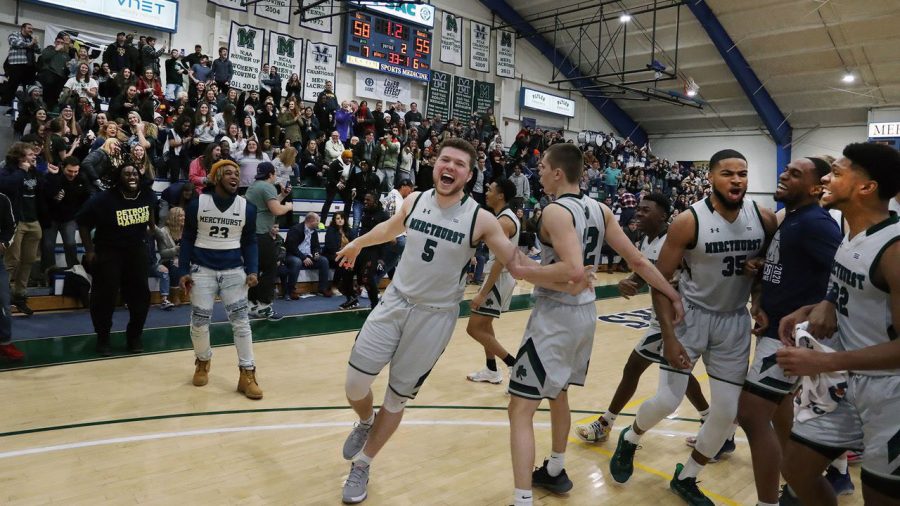 Mercyhurst University’s No. 5 Trystan Pratapas celebrates with the team after his game-winning three-pointer seconds before the final buzzer.

On Jan. 18, both the Mercyhurst Lakers men’s and women’s basketball teams faced off against the Gannon Knights at the annual Porreco Pride of Erie tournament.

The Mercyhurst women’s basketball team played a tough game in the first round of the Porreco Pride of Erie game against Gannon University.

After falling behind in the first quarter, the Lakers kept the Knights within close scoring range the following three quarters. Despite their hustle the rest of the game, the Lakers lost to the Knights 61-48.

Gannon started the game strong with an eight-point lead in the first few minutes. Seniors Amber Renz and Lauren Lapertosa responded with baskets later in the quarter, but were still trailing the Knights 21-8.

“Unfortunately, we had a rough start to the game, our first quarter was not great and we dug ourselves a hole,” Lapertosa said. “We responded in the second half however, but we did not respond quickly or efficiently enough to give us time to dig ourselves out.”

As stated by Lapertosa, the Lakers closely matched the Knights in points per quarter scoring another 10 to Gannon’s 15. Junior Emily Shopene and Renz led a 6-1 run before ending the half still down 36-18.

The Lakers closed the lead to 38-25 in the third quarter with points from senior Kori Sidwell, Renz and Lapertosa. Gannon returned making the score 49-30.

Shopene’s back-to-back three-point shots helped the Lakers in the fourth quarter for a score of 59-36, but Gannon answered with 6 more points. The Knights pushed ahead for a final score of 61-49, despite the Lakers’ other points from junior Rachel Chessar and seniors Nicolete Newman and Stephanie Petery.

Overall, Mercyhurst shot just 32.1% from the floor while Gannon lead with 49%. Lapertosa stated that the team kept up defensively, but the lack of offensive opportunities hurt them in the end. “I felt we did a good job recognizing and matching up against Gannon’s different defenses however, we just weren’t finishing the play,” Lapertosa said.

Renz reflected on the determination that the Lakers showed despite the Knights’ strong offensive game. “We never gave up,” Renz said. “The outcome of this game obviously showed we needed to work on some things in practice, but we put it all out there.”

Women’s head coach Brook Kohlheim knew this was a tough loss, but acknowledged the ladies’ resolve to improve in the second half of the game. She is looking forward to building off this game for the rest of the season.“We struggled early, but I was happy we were able to make some in-game adjustments that help us chip into their lead,” Kohlheim said. “I am optimistic if we commit to competing every day in practice and getting better, we can start seeing the results we all want.”

The coveted title of Pride of Erie remains at the Hurst after last Saturday’s win. Despite the women’s loss, the Mercyhurst men’s basketball team was victorious over the Gannon Knights at the annual Porreco Pride of Erie tournament.

Senior Trystan Pratapas clinched the win with a three-point shot in the final seconds of the game to defeat the Knights 58-55.

From the first quarter, the Lakers pushed against Gannon’s strong offense, with junior Cameron Gross returning seven points to the Knights’ initial 6-2 lead within the first five minutes of play. “We had to control the pace of the game,” Gross said. “We had to get stops on defense and execute our plays we ran on offense.”

The rest of the half was a battle with a 9-0 charge from Gannon, returned with a 10-2 run by the Lakers, only putting them behind by two points at the close of the half with 26-24.

“Leading into the second half we were confident as we knew that it was still a very winnable game for us,” Pratapas said. “We knew that Gannon would continue to play well, but we also had the confidence in ourselves to go out and compete in the second half.”

Gannon started the second half strong with a 31-24 lead only a few minutes in, but the Lakers’ strong defense was crucial. Offensively, the Lakers shot just 39.7% from the floor and 29.2% from beyond the arc while Gannon shot 52% and 58.3%, respectively.

“For us, it was all about getting stops on the defensive end and holding them to one shot a possession,” junior Zach McIntire said. “Whenever we are all clicking on defense we know we’re a tough team to beat.”

With the game tied 55-55 in the game’s final minute, the Lakers completed a successful three play to Pratapas for the game-winning shot. The team credits one another for working together to play to their strengths when it counted.

Zach McIntire shared the incredible feeling of a last-second play especially against a rival such as Gannon. “With this game being so important to the community and our school we know how much it means and we were glad we could give them an exciting game that ended with us winning,” McIntire said.

“Trystan is the best shooter I’ve ever played with and I think I speak for everyone on the team when I say we all liked the chances of that shot going in when we saw him put it up.”In hitting the game-winning shot and thereby securing the title of Player of the Game, Pratapas was thrilled with the outcome of the final play, crediting McIntosh for his opportunity.

“I think that it was definitely a memorable game for each and every one of us in our careers,” Pratapas said. “I have to really credit MiyKah for giving me such a good pass and really putting me in the position to score there.”