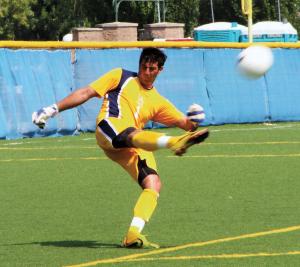 Jill Barrile photo: Junior goaltender Diego Gustin is one of the upperclassmen who must have a great year. As the last line of defense, Gustin has 18 saves on the season with one shutout. For most teams, repeating a 13-3-3 record would be considered a successful year. For the Mercyhurst College men’s soccer team, that isn’t good enough.

Even after losing two of their top three point scorers from last season, the Lakers are looking to get even better.

“We look forward, not in the past. We want to get better,” Coach Dale White said.

So far this season, they are well on their way to another NCAA tournament berth. The sixth ranked Lakers currently sit at 5-1 overall as they begin conference play. Despite having a younger team, White isn’t concerned with how his team will handle the conference schedule.

“The boys are working hard, and the young players came in very prepared,” White said.

Occasionally, on a team with younger players, nerves can become an issue and cause mental mistakes in games. But with this Laker team, the seniors help lighten the mood.

“We are one of the liveliest teams. It helps take away some pressure, but that was one of our downfalls last year,” senior Oliver Gage said.

The Lakers lost three of their last four games last season, all by one goal.

“We were looking more at our opponents and not at ourselves and sticking to what we do best,” Gage added. “We were all disappointed (last season) and we feel we have a point to prove this season.”

On a team made up of 15 foreign players, communication could become an issue between the team.

“Once we get on the field, we have a good understanding of everyone,” Gage said. “We do have an English-only music rule in the changing room, but other then that we understand each other well.”

Communication will be big as the team heads into the stretch run of their season.

“It’s nice to be up in the rankings, but we’ve got a stretch of away games coming up, and it’s too early to get excited,” White said.

The team will be on the road for seven of their last 10 games, including five straight to finish the year. Their stellar start will hopefully continue through the rough schedule that waits for them.

They will rely on senior forward Alex Manea, their leading scorer from last season, senior forward Billy Colton, who is nine goals away from the all-time school record and three-year starting goalkeeper Diego Gustin, who will aid the younger players along.

The Lakers hope to rebound from their first loss of the season when they take on conference foe Slippery Rock University on Sept. 22 at 4 p.m. on Tullio Field.