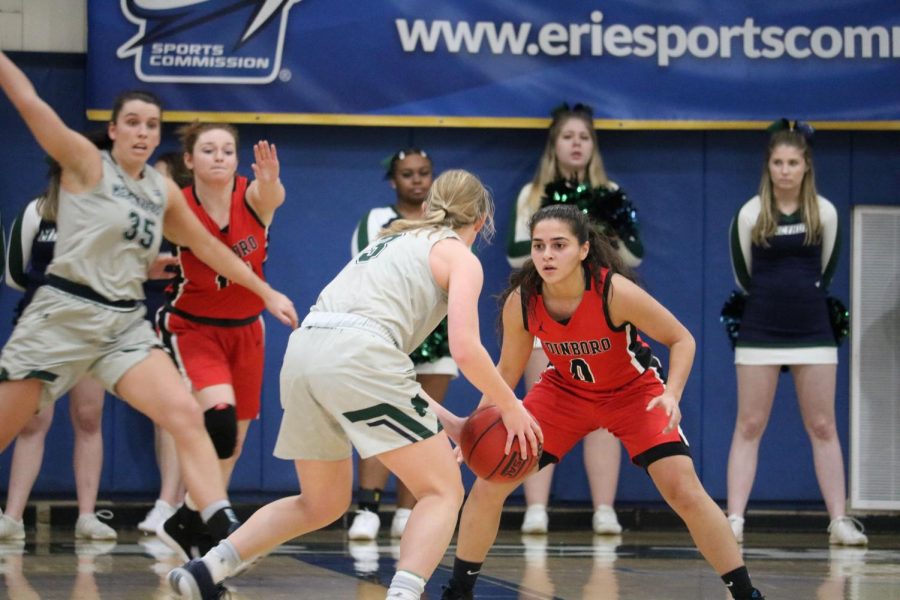 After a poor third period for the Lakers, the Fighting Scots took control of the game, wearing down Mercyhurst en route to a 78-61 win.

The Lakers (5-15, 5-9 PSAC), who rank seventh in the conference, have lost six out of seven games. Their only win was a road victory against California University of Pennsylvania on Jan. 25, the program’s first against the Vulcans.

The Fighting Scots (11- 7, 8-5 PSAC), ranked third in the PSAC West, on the other hand, arrived at the Mercyhurst Athletic Center with a three-game winning streak and were ready to make it a hard day for the home team.

Unlike the second half of the game, the first 20 minutes of the match-up was a constant back-and-forth from both teams.

The difference between the two teams was no greater than three points for the entire first half.

The Lakers, headed by Renz, scored the first nine points for the team. Lapertosa’s smart runs and fast-paced passes into free spaces allowed Renz to keep up with Edinboro’s Barnes and Elhusseini’s baskets.

For the Fighting Scots, senior guard Michaela Barnes was the top scorer with 43 points, followed by freshman guard Rana Elhusseini with 24 points.

Combined, Barnes and Elhusseini accounted for 67 out of the 78 points for Edinboro.

The Lakers suffered from too many defensive errors in the second half of the game, which allowed Edinboro to gain an irrecoverable advantage on the scoreboard for the remainder of the game.

Edinboro held a slight 40-39 lead at the half. Junior guard Rachel Chessar scored a free throw with 30 seconds left to put Mercyhurst up by one. However, between Barnes and Elhusseini’s performances, Edinboro was able to go on a 13-point run and, with three minutes left in the third period, held a 53-43 lead.

The Lakers struggled to narrow the gap over the final 10 minutes of the game. Lapertosa had to be taken out due to a possible injury with just over six minutes left, and Renz was substituted after she committed her fourth foul with five minutes to go.

With one minute left, 12 points separated the two teams.

After the game, Sidwell said the Lakers’ defense wasn’t good enough and Edinboro was able to exploit their weaknesses to win the game. She said this is something the team needs to work on if they want to be successful in its upcoming games.

“We try to have the same mentality no matter who we are playing or what point it is in the game, which is to stay aggressive and just take it at the other team,” Sidwell said. “In the second half, we weren’t as successful in this area after the other team went on a run. We need to have better responses and remain aggressive for the full 40 minutes if we want to win these next games coming up,” she said.

Mercyhurst’s bid for redemption was deferred when the Lakers fell 73-59 to the fifth-ranked Indiana University of Pennsylvania on Feb. 1.

The next home game for the Lakers is scheduled for Feb. 8 versus Clarion University at 1 p.m.

This will also be the Lady Lakers’ senior night in which five seniors will be recognized for their hard work during their past four years.