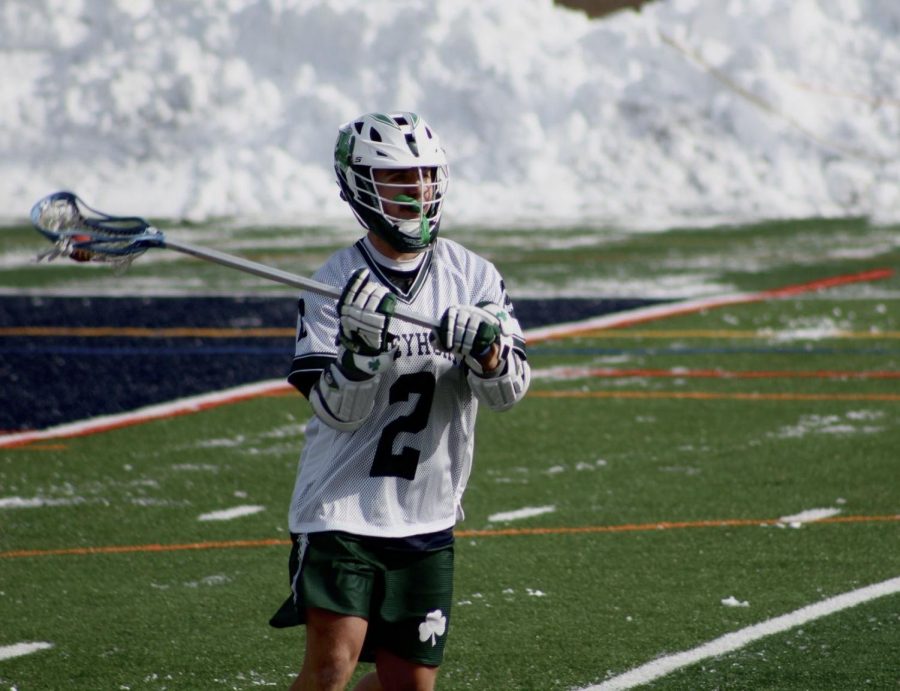 The Mercyhurst men’s lacrosse team opened its season strong with a 10-2 win over the Lewis University Flyers on Feb. 15, even with snow mounds surrounding the field.

“Some challenges faced were definitely the weather and adjusting to play in such low temperatures,” junior Caleb Keuber said.

“The weather conditions were quite challenging, causing some difficulties with stick handling.” said senior Zach Lorenz.

The Lakers had six players record goals for their first game at Saxon Stadium, with Benjamin Smith-Wilcox, Devin Pipher, Kueber and Lorenz all scoring twice. This spread of scores helps the teams unity and effectiveness on the field.

“I think it’s important that we get production from multiple players,” Keuber said.

“If we work as a unit and run our systems that coach puts in place, we should have multiple scorers in every game.” Lorenz said, “It’s very important for a team to have a lot of the guys getting in on the scoring column. It proves the depth we provide and quite honestly through out the season the depth will continue grow.”

The Flyers began the game with a score in the first few minutes and held the Lakers on defense for the next seven minutes of play. Kueber scored two more goals on assists from Pipher to take the lead at the end of the first quarter. Pipher took the score to 3-1 at the start of the second quarter, with Lorenz finishing it up with two more goals for the Lakers at the half. The Lakers continued their momentum into the third quarter, as Pipher scored twice with assists from Tommy Angelicola for a 7-1 lead. James Rettinger scored unassisted while goalie Hunter Emerson held the Flyers to only one goal to end the third quarter. Lewis University returned in the fourth quarter with a score, but could not catch Mercyhurst’s lead.

“Lewis University is a first-year program and almost all freshman, therefore lacking experience. We understood their game plan and were able to adapt to it to get some points on the board,” said Lorenz.

Smith-Wilcox solidified the Lakers’ win with two goals in the fourth quarter to end the game at 10-2.

Kueber credits the excitement of the home opener in adding to the Laker’s big win. “All the guys were pretty fired up to finally get our first one at Saxon out of the way, it’s always a little more exciting when you get to play at home in front of your family and friends,” Keuber said. “The team is enjoying this weekend’s win but is looking to the next game to carry the momentum forward.”

“It was a big win for us getting us to 2-0 but I think we need to look ahead to this weekend and get another big one on the road against Chestnut Hill,” Keuber said.

The next home game is on Feb. 29, versus the ninth-ranked University of Indianapolis. The game will be held on Saturday at Saxon Stadium at 1 p.m