Panel on #BlackLivesMatter in schools 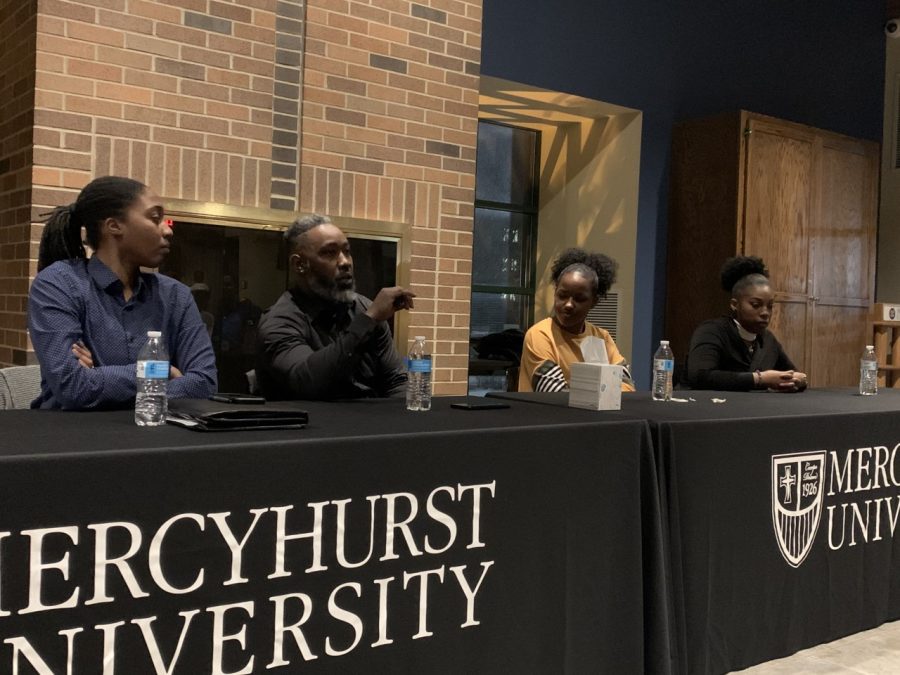 The Black Lives Matter Discussion Panel took place on Feb. 6, in the Student Union Great Room. It was hosted by The Script Project, the Applied Sociology/Social Work Department and the Multicultural Student Services office.

Heidelberg completed the Erie Urban Entrepreneur Program and opened up his own business, “Dapper Don.” He also works with the Erie Blue Coats, an anti-violence initiative working with at-risk youth to create safer schools.

Withers is a sophomore at Mercyhurst as a double major in Fashion Merchandising and Graphic Design. She is also a Laker Leader, a member of the dance team and president of Black Students for Unity.

Knight graduated from Edinboro University with a B.S. in Business Administration with a specialization in Accounting. Knight has eight years of experience under her belt and is currently working as an accounting specialist in Erie.

Janelle Newman, Ph.D., instructor of Applied Linguistics was very excited to see so many community members alongside students at the discussion, showing that these are issues that affect everyone.

“The event really brought out personal experiences as well as recognition of structural problems within our country,” Newman said. “There were so many different perspectives shared from the panelists and in the audience that could enrich everyone’s understanding of the many different sides to Black Lives Matter at Schools. It was also important to join with the national movement that held events around the country.”

The panelists also discussed the need for more counselors rather than police officers in school. In doing this, students may have better outlets to deal with their issues, increasing attendance levels and decreasing mental health issues in these young adults.

Knight described her experience of growing up in school with only two black teachers, one was English and the other was Health. She remembered her English teacher holding her to a higher standard because she knew she had the potential to be very successful in life. Realizing this, Knight came to the conclusion that black students benefit from having black teachers, because they are positive role models that can be much needed in their lives.

The panelists addressed the response of “all lives matter” to the Black Lives Matter movement. They stated that they agree that all lives do matter, but when it’s said against Black Lives Matter, the racial issues are being downsized. This causes a widespread apathy toward black lives and the systemic issues they still face.

When learning history in schools, if students of color have someone else educate them on who they are and what their history is, ideas may be misconstrued or misinterpreted. The generation of today needs to bring this idea full circle and recognize the importance of it.

Heidleberg spoke about the fact that while white people can confidently know their family’s country of origin or nationality, he would identify as “black.” He stated that black and African American culture needs to be expanded on in schools and people need to be more educated in general about the facts of history and the role of black people in it.

Following the initial stories and ideas shared by the panelists, the floor was open to a question and answer session.

Ultimately, the panelists agreed that while the Black Lives Matter movement is crucial to talk about, there must also be real action being made for change in society. This action starts with education in schools to empower the next generation.

There were also some questions on how to make other people feel more accepting of black culture. The panelists stated that truthfully, there is nothing that should be done to change who they are, because one cannot keep switching personalities or acting as someone other than themselves.

It is imperative to celebrate black culture for its differences and to learn that some people may not accept that, but if they are uncomfortable it is because of their own ignorance.

The questions also addressed other minority groups’ movements towards acceptance and equality. The panel responded by saying that people of all minority groups need to support each other and find a way to unite. Before that can happen though each separate minority group must find a way to be united within themselves before helping other groups of minorities.

The last question of the night addressed what society can do to make a safer space for current and future children of color. The answer was simply that caring enough would be a great start.

Adrienne Riegle, Ph.D., instructor of sociology, mentioned the positive feedback she received and that it was very impactful for the audience to hear first-hand accounts of the variety of ways black Americans experience race and racism in their educational experiences.

“I’m hoping our non-profit, The Script Project, can host other events in the future to grow awareness of cultural implications in educational settings and facilitate conversations about how we can all be compassionate and responsive,” Riegle said.