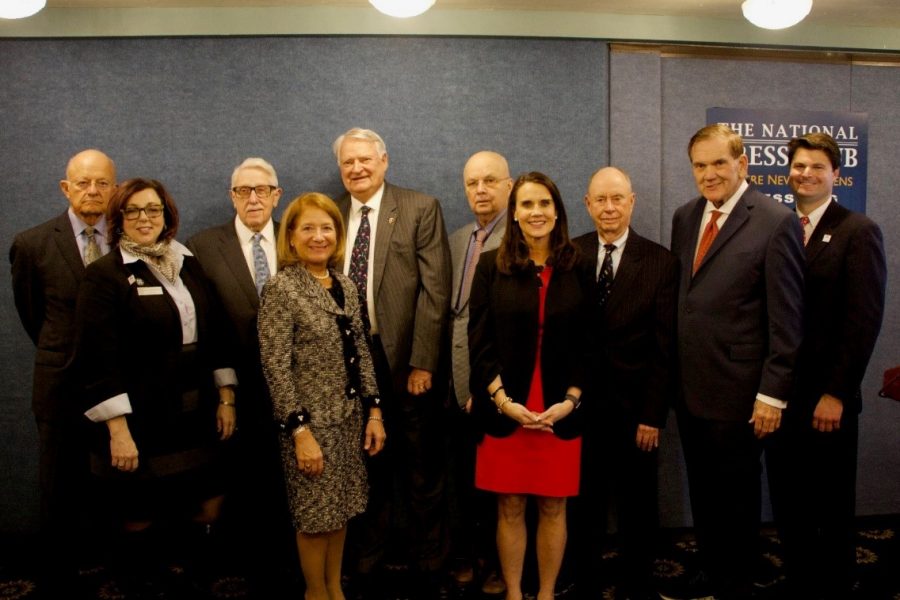 “The rationale for placing the Hall of Fame here is our prestige and legacy as one of the best applied intelligence programs in the nation.”

The kickoff unveiled plans for the nation’s first Hall of Fame to honor INSA William Oliver Baker recipients. Since 1984, the William Oliver Baker distinction has been bestowed upon intelligence professionals who have achieved excellence or made significant contributions to the intelligence or national security communities. Hayden, Money, Kerr, Clapper and Studeman are all former Baker Award recipients.

In addition to honoring these award recipients, the Hall of Fame will function as a teaching tool for the public. It will showcase the work of the 17 branches of the United States Intelligence Community, each of which employs alumni from the Ridge College. Plans call for Mercyhurst to renovate the Hammermill Library to make way for the Hall of Fame. The space will be equipped with professionally designed exhibits and high-tech programming.

Dean of the Ridge College, Duncan McGill, Ph.D., is excited about the development.

“I believe the creation of a Hall of Fame is fantastic. It allows the university that pioneered intelligence education to honor the best of the best for their service to nation. Those few selected represent hundreds of thousands of employees over the years who quietly operated in the background, never seeking self-reward, yet kept our nation safe.”

Mercyhurst was deemed to be the perfect home because the university lays claim to the oldest and largest school of applied intelligence at a college in the United States. Mercyhurst’s Intelligence Studies program, which was founded in 1992, was known as the first non-governmental initiative of its kind in the United States. Mercyhurst Intelligence Studies graduate Maggie Hackney ’19 was one of the lucky alumni who made it to the kickoff event.

“The US Intelligence Hall of Fame deservedly recognizes established intelligence and national security professionals whose selfless contributions have ensured our nation’s safety,” Hackney said. “Mercyhurst alumni are honored to be affiliated with INSA and the renowned William Oliver Baker award. With its INSA partnership, Mercyhurst once again expands the nexus between the national security field and academia. I look forward to all Mercyhurst and INSA will accomplish together moving forward.”

In addition, the Hall of Fame will serve as an educational resource for future Intelligence leaders.

“Our partnership with INSA demonstrates the respect the Intelligence Studies program has today within the community of professionals,” McGill said. “One day, I believe one of our students will be a member of the Hall of Fame.”

A new individual will be awarded the Baker Award each June in Washington, D.C. Funding for this project will allow them to spend a week at Mercyhurst as a “Scholar in Residence” during their induction. They can use this time to interact with Ridge college staff and students.

“This gives us exposure with the giants of the industry,” Danzell said. “In the short term, it highlights what we do here at Mercyhurst on a national level. In the long term, it reinforces our gold standard in intelligence education. We also get the added bonus of welcoming a well-known, nationally recognized award winner to Mercyhurst, and to Erie, each year.”